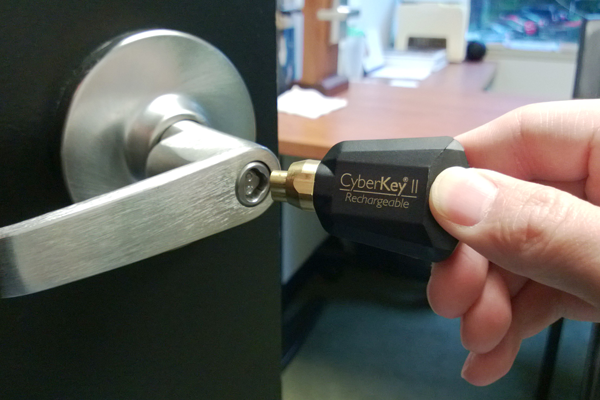 Keeping tight security on a building is essential for its tenants and owners, making access management a high priority for facility management teams. Facing challenges around maintaining site security has been commonplace, however, especially in view of the inherent flaws of mechanical master key systems. This really comes to the fore when a key is lost or, worse, stolen. Ask any security, facility or asset management firm and they will know intimately the major compromise to a site’s security a missing key can bring.

Such was the case at the iconic 1 O’Connell Street building in Sydney’s financial district near Circular Quay. In 2014 Vaughn Papworth and a JLL management team, took on the management of the building; however, keys had gone missing previously and the site had already patched its main master key system with a second one. This was a sensible step in order to relieve the compromised security without having to re-key the entire building at considerable expense. Yet, it left the building open to the same risk should key losses reoccur and also having to use more keys to gain access around the building.

Vaughn Papworth had recognised the EKA CyberKey System as a superior alternative to traditional mechanical key systems at another Sydney landmark building, which had embraced it some years ago, and was aware of its capabilities. Electronic key systems not only curb the risk that lost keys pose, but also alleviate the need to replace many locks and keys in such a case. Essentially, they reduce the security risk associated with the loss of any keys completely.

After thorough investigation by the JLL management team at 1 O’Connell Street, the building underwent a retrofitting of some 450 door locks with state-of-the-art EKA CyberLock cylinders. The result is nothing short of being the next generation of access control with zero security volatility.

The electronic CyberKey system essentially combines programmable electronic keys that can have any level of access ascribed to them, combined with a wide range of CyberLocks (350 different cylinder types), which read the permission level of each key, allowing access only in accordance to the permission granted. The other main component is the 20-key CyberLock Vault, which gives maintenance personnel access to individual keys only by way of a personalised PIN or access card, which automatically transfers the right access level to the key.

Trade and maintenance contractors, cleaners and other periodic staff can simply open the doors they need access to with their key prescribed with their personalised access permission. Upon completion of their task the key is simply returned to the CyberLock Vault where it is instantly registered as returned, delivers a full usage audit to the software interface, and is recharged and wiped clean again ready for its next user.

Best of all, permissions for each key can be set for specific areas of access and have time limits set via the dashboard, giving each key/personnel member tailored access. Should a key ever go missing or not be returned, access rights are automatically removed from the key after the specifically programmed time period. The key stops working with the ending of the programmed permission, rendering it unusable.

Alternatively, an appropriately authorised key can be used in cylinders to nullify the use of the other key immediately.

There is no need to replace locks or be concerned about any security risk as any key ‘missing’ is essentially useless. Other features of the EKA CyberLock System include removing/adding of key permission at any time, full one-glance control of all keys, and monitoring of the extend of permissions granted. Having instant access to full audits of each key, and even from lock cylinders installed throughout the building, means managers have greater control over contractor access. This makes it easy to manage and monitor access of external crews with no security risks – unlike traditional master key systems.

During his 26 years in the facility management industry across dozens of buildings, mostly operating mechanical key systems, Vaughn Papworth has seen around a quarter of these buildings operating with impaired systems or across two or more key systems. This means that they are facing a constant security threat of potential key loss and consequent retrofitting.

According to Vaughn Papworth, the threat of security compromise and the looming cost of potentially having to re-key part or a whole building in the case of key loss is non-existing with the CyberKey system.

“I treat the properties I manage like I would my own home. If something needs fixing, I fix it in a way that’s better than it was before, so I don’t have to fix it again. I think anyone in facility management would do the same,” says Vaughn Papworth.

“Installing a new mechanical master key system that will again be compromised should a single key be lost seems backwards to me.
I don’t know why anyone would invest in an archaic key system when there are better solutions available that present zero security risk,” he says, “I just love it.”

The security manager at the O’Connell Street building, Patrick Le Plenier, says, “Our obligation lies with our tenants to provide them with a secure and safe environment. We have financial firms and tenants managing sensitive data, we can simply not afford any security risks.”

Traditionally, Le Plenier needed to physically audit the key register of hundreds of keys to see if a key was missing. This took considerable time on a daily basis. Then, if any key was missing, he had to manage the intrinsic risk associated with it until locks could be replaced. He had great concern about the lag-time that is usually associated with having to retrofit mechanical locks before security could be re-established, let alone the considerable cost.

With the building’s new CyberKey system auditing the keys is done automatically and with added email notification, plus the interface has visual cues should a key not be returned by its due time. Best of all, any missing key can have its access permissions blocked immediately, presenting zero risk to the integrity of the building’s security.

The first stage of implementation of the EKA CyberKey System at O’Connell Street saw some 450 doors being retrofitted with CyberLocks. The installation of these new-generation locks was accomplished in just five days, with each door being instantly functional, presenting no downtime. Following the success of integrating the system, stage two has now been implemented, covering security areas such as communication rises. The JLL management team is now considering rolling out the new high-security electronic key system into other properties under
its management.