Addicted to the coffee meeting?

Addicted to the coffee meeting? 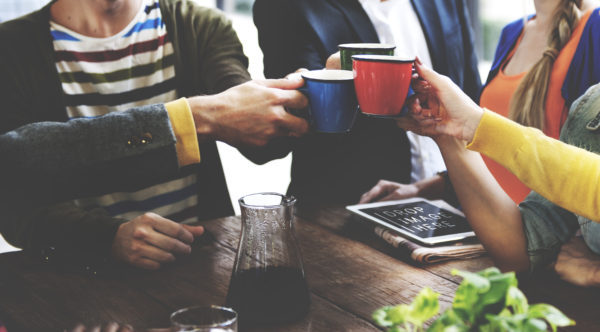 Catching up over a coffee or tea is widely accepted as a great way to maintain business relationships. Many of us do this daily, but for others it can be much more frequent, even up to four or five times a day.

Combine that with our regular tea or coffee breaks and there’s a very good chance we’re taking in a lot of caffeine.

Caffeine has addictive qualities. Indeed, it’s described by the World Health Organisation as a stimulant drug. It’s found in coffee, most teas, energy drinks and bars, certain soft drinks and some over the counter medications (such as cough syrup). Then, there are some of our favourite indulgent snacks. But are we doing ourselves any favours by consuming caffeine?

As a stimulant drug, caffeine acts on the brain and nervous system, speeding up the messages travelling between the brain and the body. Its effect can be immediate – providing us with an increase in breathing and heart rate, accompanied by a short burst of physical energy.

Medical research elaborates on the effects of low and high caffeine consumption: low and irregular caffeine consumption can make you feel refreshed, focused, ‘pepped up’, while high and regular levels of caffeine intake can cause anxiety and possibly lead to difficulty sleeping.

We know that individuals can build up a tolerance to caffeine, depending on their consistent daily consumption. As with any drug, it means you need to consume more to obtain that feeling of energy or pep.

So what are the symptoms of excessive caffeine consumption on a consistent basis? If you’re constantly reaching for another coffee or energy drink to get through your day, you may experience some or all of the following:

So how much is too much? Every individual’s reaction to caffeine (like other drugs) depends on variables such as body mass, one’s state of health, metabolism and how consistently it is being consumed. As a rule of thumb, medical researchers claim that 400 milligrams per day or less is considered an acceptable dose of caffeine, which equates to four cups of ‘standard’ coffee a day. And don’t think you’re home free if you drink decaf. Decaffeinated coffee or tea still contains some caffeine, albeit at lower levels.

ADF research published in May 2016 identifies a slew of health problems that heavy caffeine use (more than four standard cups of coffee) may eventually cause and these include osteoporosis, high blood pressure and heart disease, ulcers, heartburn, anxiety and depression.

Many people feel they ‘need’ a coffee or tea first thing in the morning, or as soon as they get into work ‘in order to start the day’. Does this indicate potential problems with the effects of caffeine? That may not be the case, but a new year is a good time to perhaps rethink your relationship with stimulants that may give you short-term gain but long-term pain.

Is it time to think twice before you invite your next client to ‘catch-up over a coffee’?