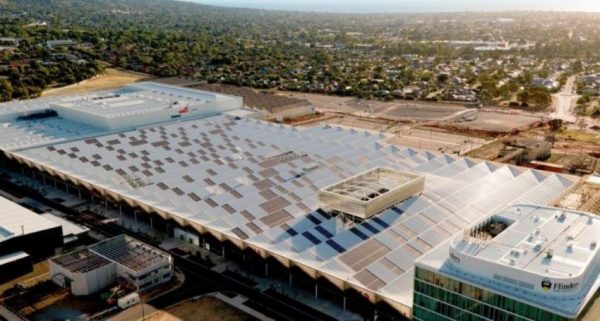 An energy production and trading scheme designed for the Tonsley Innovation District in Adelaide will incorporate one of Australia’s largest rooftop solar arrays to provide energy to businesses and homes within the growing precinct.

The South Australian project will be delivered by Enwave Energy, a subsidiary of Enwave Australia. Cameron Evans, CEO of Enwave Australia says it would invest about $40 million over a 50-year period for photovoltaics (PV), battery storage, smart technologies and future electrical assets.

“We take a long-term view of these projects, which enable us to build our return over a long time,” he says.

The District Energy Scheme will use energy generated by about 20,000 solar PV panels installed on the expansive eight-hectare roof of the former Mitsubishi factory building and adjoining TAFE SA building.

A battery storage solution will be added to the six-megawatt solar array when demand for the service increases. This is likely to be when the Tonsley site grows to include residential housing and more industry.

“We’ll have an existing connection with the grid as well as having some on-site generation, primarily utilising solar PV and that enables us to draw on either the grid or our own energy generated on-site, depending upon the time of day [and] the amount of energy available,” says Evans.

“The benefits of that approach means that we increase reliability to the site by having on-site generation while also ensuring we can provide a competitive energy cost by being able to either draw on our own energy sources when the grid pricing is high or to utilise the grid when we don’t have solar available or during off-peak times.”

Evans says the District Energy Scheme would also integrate a range of smart technologies and networks to monitor and regulate the system. “A smart management system enables us to optimise the time at which we either take energy from the existing grid or we utilise the generated energy from the site or when we utilise our storage.”

Businesses at Tonsley have the choice to buy their electricity from either Enwave Energy or an energy retailer of their choice.

Other components of the District Energy Scheme will include recycled water and thermal energy utilities facilitated by on-site infrastructure.

“We have an agreement with one of the local councils to take storm water which we’ll then treat, turn into recycled water and reticulate to a number of customers in the precinct for non-potable uses,” Evans says.

“Similarly, for thermal energy, we’ll provide some chillers and boilers which will enable us to reticulate it in the form of either hot and cold water to be used by buildings to ensure efficient processes around the way in which they are cooled or heated.”

The company is expected to establish a five-person office at the Tonsley precinct by October and commence the installation of the solar array and key assets next year. The solar system is expected to be fully operational by the second half of 2019.

Tonsley is managed by Renewal SA on behalf of the South Australian Government and is the home of leading firms in the renewable energy sector, including SIMEC ZEN Energy, Tesla, AZZO and Siemens.

“The scheme will help consolidate Tonsley as a hub for renewable energy investment and innovation and help to attract more businesses keen to establish in an environmentally sustainable innovation district,” Devine says.

The scheme highlights South Australia’s leadership in the adoption of renewable energy.

SolarReserve has announced a $650 million Aurora Solar Energy Project, involving the development of a 150-megawatt solar thermal plant in Port Augusta, the largest of it’s kind in the world.

South Australia leads the nation in wind energy and rooftop solar with renewable sources accounting for almost 50 percent of the electricity generated in the state.

This article was written by Anthony Dodd and first published on The Lead. It has been republished here with permission.