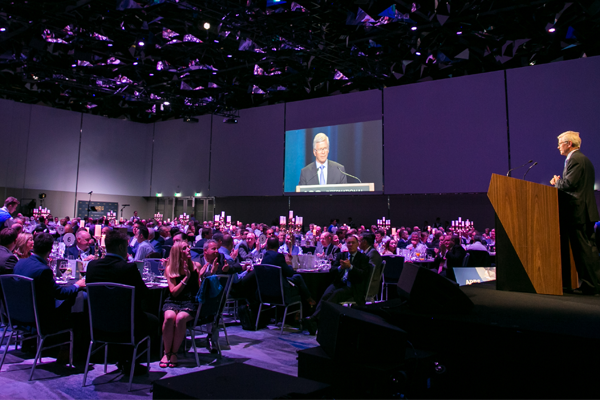 ARBS 2018, Australia’s only international air conditioning, refrigeration and building services trade exhibition, has announced the ARBS Industry Awards winners for 2018. A panel of industry experts evaluated the nominations based on various criteria such as leadership, sustainability, performance and innovation to select the finalists. The award winners were honoured at a gala dinner held on Wednesday 9 May 2018 at International Convention Centre (ICC) in Sydney.

ARBS chairman, Ian Hopkins, opened proceedings by welcoming attendees to “this celebration of ARBS 2018″’. Media personality and emcee, Tony Squires, then thanked guests for attending and remarked, “It’s such a great pleasure to be with you to celebrate your industry and all the achievements you’ve all worked so tirelessly towards.”

The first award of the night, the ARBS Outstanding Industry Education/Training Award, was presented to Danfoss Australia for its Mobile CO2 Training Unit. This training unit provides easy-to-access, hands-on training for the thousands of installers, service technicians and OEM engineers worldwide that want to take full advantage of the natural refrigerant. The team acknowledged the importance of making training available to front line personnel saying, “We are proud to bring this new technology to a comfort level of our technicians at the coalface.”

The ARBS Outstanding Service and Maintenance Award was then awarded to A.G. Coombs Group, which celebrated success by congratulating its team: “Thanks to our people, our managers, our general managers, our technicians, our support staff – our people define us.”

A new category for 2018, the ARBS Software/Digital Excellence Award, was claimed by HydroChem for Clarity, an online application which presents real-time field data in visualisations. Users can quickly view and understand vast amounts of asset water health information at a glance with its innovative distillation of big data, which may well be a world first in the battle to control Legionella outbreaks. HydroChem gratefully accepted the prestigious award, musing over the small but important niche they fill in the HVAC+R industry.

Next the ARBS Product Excellence Award was presented to Air Change for ACDHUM-LD, the first Australian made dehumidification unit with air to air counterflow plate heat exchange technology for temperature and humidity control. Air Change acknowledged its passionate team in making this a product a reality.

The ARBS Project Excellence Award was given to F Mayer Refrigerated cold storage / distribution centre, Strathbrook Industrial Services and Danfoss Australia. On accepting the award, Ian Wilson of Strathbrook Industrial Services said, “CO2 has so much more potential than is currently being used in Australia” and urging those in the industry to “check it out as there is a massive future for it.”

Always a highlight of the awards ceremony is the ARBS Young Achiever Award 2018, and this year was no exception with the energetic Jason Harrison from Airmaster Australia claiming the award. Jason said it was a great industry to work in and cited mentoring as a direct influence for his achievements, declaring, “It has helped me to succeed.”

Rounding out the evening was one of the most prestigious awards on offer presented to five lifelong contributors to the HVAC+R and building services industry who were inducted into the ARBS Hall of Fame 2018.

John Bosci (nominated by AIRAH) reflected on the many years he had worked within the industry and thanked AIRAH during his acceptance for “the recognition they bestowed on me tonight”.

Warren Cole (nominated by RACCA) expressed that this was his lifelong passion, saying, “I started in this industry when I was just 14 years old – I’ve always been in it, and I love it.”

Stephen Gilchrist (nominated by CIBSE ANZ) on accepting the award mentioned his interesting journey in the industry, saying, “Without the people I’ve met on that journey and without the friends I’ve made, I would not be standing here tonight.”

Mark Padwick (nominated by AREMA), on collecting his award, said, “To be recognised for doing something you truly love is not kind of fair,” and added, “It really is humbling.”

David Seedsman (nominated by AMCA) thanked industry “giants” Allan Coombs and Barry Smith for “the opportunities I’ve had in life”, and accepted the award on their behalf.

The ARBS awards, now firmly entrenched as the pinnacle of achievement in the HVAC&R and building services industry, attracted nominees from across all sectors. The ARBS Industry Awards are held every two years in association with the ARBS Exhibition. For further information visit www.arbs.com.au.