With careful long-term planning and considered approach to materials, resources and positioning, the FM-led ACU Brisbane Mercy Building is a great example of how big budgets and grand sustainability gestures aren’t the only ways to cut emissions and boost efficiency.

After a lengthy planning and construction period – more on that later – Australian Catholic University’s (ACU) Brisbane campus opened its Mercy Building in 2018. Great expectations were placed on the building to contribute to ACU’s benchmarks for improving energy and water efficiency. In April this year, ACU announced impressive results, both in the building and across campus. Without access to the same funds enjoyed by Australia’s larger academic institutions, ACU’s project was made possible by its small team’s committed focus on the fundamentals and driving down resource consumption.

ACU’s national sustainability manager Mark Doggett describes the Mercy Building project, and indeed the organisation’s entire approach to sustainability, as having a “very strong FM-based focus”. With steadfast determination to cut costs and unnecessary use in the fundamentals of water, energy, waste, materials and greenhouse gases, the school is all about measuring environmental impacts. Doggett explains how, without funding for solar panels or major contracts to purchase renewable energy, and without teams of engineers that one may see driving sustainability initiatives at somewhere like Monash University or Melbourne University, ACU is consistently shown to be one of Australia’s most energy-efficient, water efficient and low greenhouse impact universities in the country.

“We have to find a way to deliver sustainability for the university in a way that matches our internal resourcing… it’s come down to daily disciplines, very much around making sure we attack waste whenever we’re able to identify it and see it,” Doggett says. The team has sharpened this “clear-eyed understanding of what delivers the best value for an organisation from the point of view of sustainability” over the years.

“The cheapest energy is always the energy that you don’t buy,” he says, “likewise for water consumption and waste generation.

“You have to be very honest when you consider the [usage] data and, if you are, you always come to those sorts of conclusions that less is absolutely more when it comes to good sustainable management of an organisation.”

“It was about being very clear-eyed about this, and thinking ‘well, what gives the best bang for buck for the organisation and for a sustainability program?’,” Doggett recalls.

Chris Gill, ACU’s state development manager for Queensland, New South Wales and the Australian Capital Territory, and project manager for the Mercy Building’s planning and construction, walks us through the many and challenging steps it took to ensure the project was a success. The Mercy Building would not stand alone as one sustainable asset; it would instead become a centralised plant for the entire campus’ sustainability efforts. To call it ambitious would be an understatement.

Among other things, it involved choosing a different location to the one originally planned, so as to better reflect the climate of the region (including shading an adjacent building to reduce cooling costs). “We had to move every service known to mankind,” recalls Gill, who proceeds to list them: fire hydrant, main incoming water, air-conditioning, high voltage and low voltage electrical distribution, Telstra, sewer and loading dock. “Every service got touched on that campus. Unprecedented.” 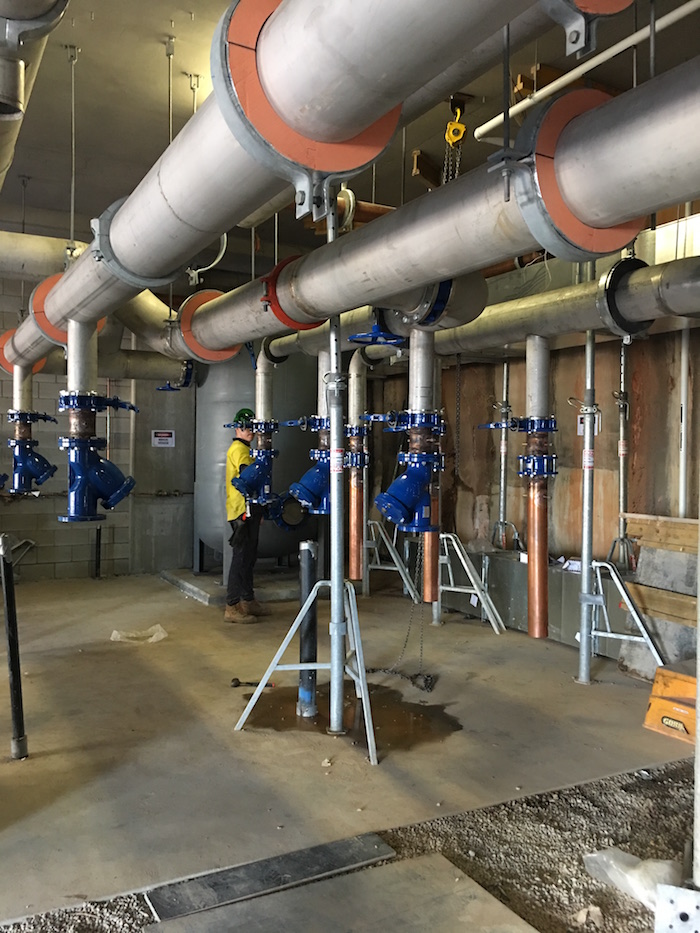 Pipework being installed for the chiller plant. As the campus uses a centralised system, the air-cooled chiller and the water towers work in unison, requiring extensive pipework in the basement.

As if this wasn’t enough to juggle, the team had to grapple with a number of further challenges including a handover between two different building contractors, minimising noise and careful scheduling to eliminate disturbance during exam periods (which continued despite demolitions and construction work), 2017’s Cyclone Debbie and a couple of coordinated campuswide electrical shutdowns, which necessitated generators for dehumidifiers in the library and freezers in the morgue.

It involved input from facilities management, ICT department, the university’s executive board, campus staff and students, to minimise disruptions to all while balancing a tight schedule and budget. This added to the massive challenge and took what Gill calls a “perfect synergy between all those groups” to be successful. And luckily, there were no big surprises in the process, apart from a 27 million-year-old riverbed found beneath the site’s footprint. It was part of an ancient weather system that brought mass flooding throughout the Queensland area. Archaeology lecturers were brought on-site to collect sediment samples for teaching.

The building itself is kitted out with some carefully chosen materials and systems, all with efficiency, impact and long-term performance in mind – energy-efficient glass windows, LED lighting, a rainwater retention tank in the basement and responsibly-sourced timber throughout.

And it doesn’t stop at the build, it goes right down to the appliances, tables and chairs. All appliances installed, such as dishwashers and TVs, were the most energy efficient in their class. A semester-long furniture trial for students, a morning tea for 100 staff to come and test workstation chairs, and a survey, were carried out to pick winners. The concern was: “if the furniture didn’t suit the needs of students and staff, it would [have to] be replaced,” meaning more repeated costs and heavier footprint in the long run.

All of the furniture is AFRDI (Australasian Furnishing Research and Development Institute) rated, uses recycled materials and is made in Australia with Australian products where possible, or uses sustainable processes from suppliers overseas in instances it’s imported.

ACU’s strict dedication to minimising campus waste was applied to the delivery and acceptance of the furniture. The team ensured packaging was recyclable when it came to site and requested that suppliers remove packaging for transport – even if that meant slight wear and tear. “We said ‘we don’t want you to put one chair in a plastic bag and send us 600 chairs, we just want you to send us chairs and we’ll take a bit of a hit if there are some that get damaged in transit’,” Gill says. The rigorous selection process undergone to choose the furniture was one of the biggest lessons of all for Gill. “It’s one area that gets overlooked. It’s such a big expense and it’s also one of the things that gets used heavily, but it’s something that we have the power to actually change.” ACU still uses the selection template today when procuring any new furniture.

The ACU’s proven approach to reducing energy costs, emissions and environmental impact isn’t without its challenges – as if meeting the strict adherence to ACU principles isn’t challenging enough. Doggett, Gill and the team squeezed every last piece of value and performance from everything and everyone, right from the planning, through the construction and now the ongoing performance of the building. Where others may pour large sums into now-popular ‘grand gestures’ of sustainability, ACU used methods within its means.

“It’s not Green Star, it’s not certified to any standard,” says Gill, “but we used good practice across the board and we wanted to make sure that we were using the latest and greatest technology and making sure that whatever decisions we made were truly sustainable.

“There was a lot behind the scenes that we also [now] carry over to other projects. While we don’t have certs on the wall, we know that everything inside is as efficient as it can be.”

For Doggett, it’s not always the easiest sell; as you can imagine, universities are spaces that entice progressive pupils keen to see some commitment. “It’s hard to inspire people when you talk about efficiency compared to, say, talking about big things like adding vast arrays of solar panels or major contracts to purchase renewable energy. “It matters, certainly, to a lot of your audience – they’ll get it,” he says of FM readers in an interview.

Building up the program has taken years for Doggett. He’s been at ACU since 2012. Two factors, time and information, have seen it come to life and garner executive support. Gathering the vast body of data it took to inform projects like the Mercy Building was a long haul. “In many cases, until the last few years, utility providers and waste companies have only done a fairly mediocre job,” when it comes to providing the data facility managers need. “Now they’ve picked up significantly and that’s been enormously helpful,” he says.

“But that’s always a barrier; you don’t get that sort of insight until you’ve spent time acquiring that sort of data. It’s laborious and it feels like treading water but then suddenly you get this amazing insight that you can turn into real action.”

Now armed with the information and insight, Doggett and the team are using it for a number of things. Executive buy-in on sustainability initiatives, the ongoing performance of existing projects and the optimisation of new ones. They’re even ready to start looking at some of those larger green gestures.

“We’re now at a point where we think the programs are mature enough for us to start looking at the bulk purchase of renewables and adding solar in substantial amounts… it was very much a considered decision not to pursue that until we were running a very tight ship.”