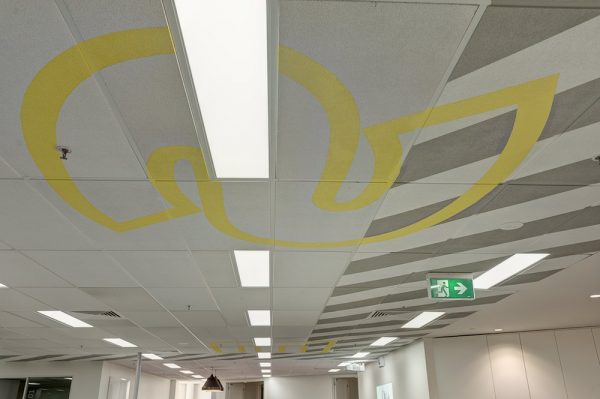 Here we continue FM Workspace360 – a new platform bringing you the latest, greatest and most exciting innovations in the FM industry – and in this second instalment FM looks at progressions in ceiling restoration through the eyes of EnviroScope and Dulux. By TIFFANY PACZEK.

Ceilings play a significant role in our lives and the lives of our buildings, yet how often do we give thought to what’s above our heads? How often do we give scope to maintaining a ceiling and the impact this commonplace (yet vital) thing can have?

Dulux, the internationally available brand of architectural paint, and EnviroScope Maintenance, a company delivering commercial painting and maintenance services to Australian businesses, are two companies making headway in the ceiling sphere. Specifically, they are looking at developing ways to restore, rather than replace, ceilings when they’re in need of a little TLC.

Traditionally, replacing a past-its- prime ceiling has been both costly and time consuming.

According to EnviroScope, the ceiling restoration market is relatively uncharted territory in Australia, with replacement generally being the first course of action.

Dulux is breaking ground with its new product, the Dulux Professional Acousticoat Ceiling Tile Paint, a flat acrylic ceiling paint designed specifically to help refresh aged acoustic ceiling tiles. It has been specially formulated to ensure that paint will not stick tiles to the grid system, so it can be applied to grids and tile simultaneously.

Steve Champion, trade brand manager for Dulux, says, “In the past acoustic ceiling tiles have been something that we couldn’t paint because it would damage the acoustics.

“It’s one of those things that is across many industries, so lots of people have acoustic ceiling tiles. The ease of roof access makes a floating ceiling a brilliant option in many construction areas. The problem comes when they do look a bit tired or suffer some water damage; replacement used to be the only option, but now refurbishment is a real alternative.”

The innovative technology behind the paint makes the restoration of acoustic ceilings readily accessible and financially viable for those faced with an ageing or deteriorating ceiling.

“The Acousticoat product is a specially formulated product that doesn’t block the pores of the acoustic tiles,” Champion explains. “The gaps in the tiles are really what perform all the acoustic benefits, and this paint is separate to others in that it doesn’t block those pores and it keeps them open to absorb all the sound. Regular paints will paint ceilings, but they will turn them into echo chambers and you won’t end up with that nice quiet office that you started with.

“Our new paint will maintain the acoustic properties of ceiling tiles while revitalising them and making them look like a whiter, brighter ceiling,” Champion says.

Similarly, EnviroScope has developed its ProCoat Systems – a unique range of spray-applied coatings that offers a cost- effective, long-lasting alternative to replacing aged, stained or mismatched suspended ceilings across a wide range of commercial environments, without losing performance or functionality.

EnviroScope’s executive director Dyan Sisouw says that ceilings are often an afterthought in the refurbishment process, but there needs to be more discussion around creative ideas of ceilings.

“We are looking to create a new standard of service. Many businesses don’t realise the potential extra value that ceilings can add to a space and there is more room than ever for creativity,” Sisouw says.

Facility managers can now rest easier in the knowledge that a small water stain or flaking paint job no longer means a full ceiling replacement.

“The return to service of a painted ceiling rather than a replaced ceiling is a big plus,” Champion says, “not to mention the waste generation of throwing out all your old ceiling tiles and starting again. The other key benefit is you need a plumber, electrician and labourers to replace a ceiling; you just need a painter to repaint.”

A spokesperson for EnviroScope says, “The colour of a ceiling will inevitably change over time from sources of contamination such as air diffusers or water damage.

“Most commercial buildings have acoustical ceilings in place. Prior to ProCoat Systems, there would be no alternative but to remove and replace the ceiling once it becomes discoloured.

“ProCoat offers an alternative to traditional ceiling replacement. The process involves restoring existing acoustic ceilings in a cost- effective way, all with a process that minimises disruption to business practice.”

So FMs can look up and look ahead – to a whiter, brighter, better future for their ceilings. ●