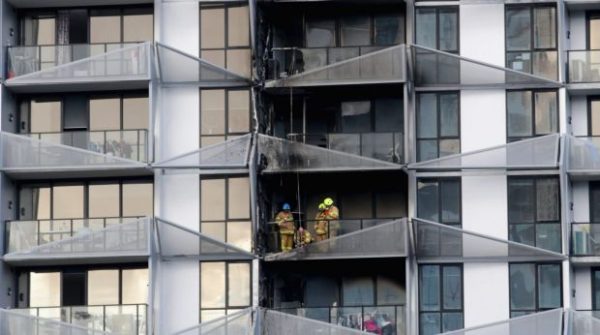 The devastating inferno in London apartment block Grenfell Tower, which tragically killed at least 17 people, has sparked discussions about buildings’ cladding and the part is has played in recent fires.

In the early hours of Wednesday 14 June, flames tore through the West London residential facility, igniting somewhere on the second floor and quickly racing to the top. Firefighters responded to distress calls within six minutes, but even so, by the time they arrived flames had engulfed the 24-storey building.

While the cause of the fire is under investigation, suspicions that the tower’s cladding contributed to its speed and ferocity have surfaced and sparked debate over the importance of compliant materials. Online records from Harley Façades Ltd indicate that Grenfell Tower’s most recent renovation may have installed flammable cladding on its exterior by using an aluminium composite material (ACM) rainscreen. The cladding is made using aluminium sheets and a polyethylene fibre core.

Similarities have been drawn between Grenfell’s towering inferno and the 2014 blaze that ravaged Melbourne skyscraper Lacrosse Tower. ACM was found to be partly responsible for the 23-storey Docklands building fire, the combustible material fuelling the blaze that almost destroyed the building. It took just 11 minutes for the flames, started from a disposed cigarette, to race up the north-eastern side of the tower, forcing the 300 residents to flee.

In its report, the Melbourne Fire Brigade states the fire spread rapidly, rising 13 floors in 10 minutes. “The extremely vertical nature of the burn patterns to the exterior face of the wall suggest that the Alucobest aluminium cladding, along with foam lagging and the PVC pipe of the building wall, contributed to the fire load and the rapid spread of the fire up the vertical face of the building to the floors and balcony areas located above,” the report says.

An investigation into the Lacrosse Tower blaze found the use of ACM cladding did not meet compliance standards and breached combustibility standards, and the Buildings Appeal Board ruled that the high-risk balcony cladding be removed.

The Dockland’s inferno acted as a catalyst for an industry-wide discussion around non-compliant building materials and revealed a number of imported products don’t meet Australian standards. In the wake of the Grenfell Tower tragedy, senator Nick Xenophon has called for all Australian buildings suspected of having non-compliant cladding to be inspected and audited.

Incidents such as these are hard reminders of the importance for builders and building owners to choose the correct and compliant products, to avoid the tragic ramifications. Disasters like these could be easily avoided, if shortcuts were not made in the construction stages. In both cases, if the external cladding had been of a non-combustible material, the likelihood of the fire spreading so rapidly beyond the level of ignition would have been significantly reduced.

Following the Lacrosse Tower fire, the CSIRO conducted tests on ACM cladding and found it to be combustible and did not meet building standards. A 2016 investigation by the Victorian Building Authority reported that of the 170 buildings audited, 85 used materials that were not compliant with Australian building codes, and the material has been used in construction all across the country. The estimated cost of replacing the Lacrosse Tower cladding is $20 million, and it is yet to be conducted.

In the aftermath of the Grenfell Tower tragedy, senator Xenophon has called for a tightening of compliance regimes around building materials and an urgent audit of high-rise buildings in Australia.

Builders Collective of Australia president, Phil Dwyer, cautions apartment buyers against purchasing in any block that uses combustible cladding. “Don’t take the risk,” he says, “it’s just not worth it.”

Editor’s note: In the week since this story was published, the number of presumed deaths from the Grenfell Tower tragedy has risen to 79 – and counting. It has also emerged that the cladding on the building contained insulation and helped the rapid spread of the flames. Trade minister Greg Hands and treasury chief Philip Hammond have revealed in separate interviews that the cladding used on the Grenfell Tower is prohibited under British regulations, and officials don’t yet have the exact details of the tower’s renovation that ended last year.

Labour Party politician David Lammy has called for all documents relating to the Grenfell Tower renovation be seized and kept intact in order to prevent any destruction of evidence that may show criminal wrongdoing. Police Commander Stuart Cundy has confirmed that police will seek criminal prosecutions if the evidence warrants.