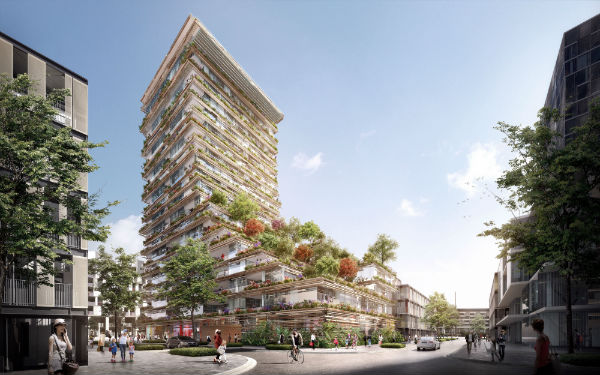 The five-building development is the first collaboration of its kind for the harbour city.

Kuma is the master behind the eye-catching focal point of the development, an innovative 19-storey tower featuring a striking plant-filled, green exterior designed to emulate a stacked forest.

Kuma has conceived the unique, timber-clad ‘stacked forest’ exterior to revolutionise Waterloo’s skyline, topped with a spectacular, cantilevered rooftop pool, gym, spa, resident’s lounge and even a mini-cinema, delivering what is calls the finest facilities of any Sydney apartment development to date, with striking interiors by Takada.

The urban forest is central to the theme of this inspired building, designed to connect inner city residents to nature, and bring to life one of Kuma’s central beliefs: “It is always in dialogue with humans; but good architecture does not attempt to fix nature—instead, it moves with nature, always continuing the dialogue.”

Crown Group’s Sunito says his vision for Mastery by Crown Group was for it to become a vibrant and diverse community in Sydney’s inner suburbs.

Located at 48 O’Dea Avenue, Waterloo, Mastery by Crown Group will comprise 384 luxury apartments, resort-style residents amenities including the pool, gym and community room and a ground-floor retail precinct comprising a mix of restaurants, cafés and shops.

Named Urban Taskforce Property Person of the Year 2015, Sunito graduated with Bachelor of Architecture (Hons) and Masters of Construction Management from UNSW and was awarded the UNSW Eric Daniels award for excellence in residential design before becoming a Registered Architect in 1993.

Sunito co-founded Crown Group with business partner Paul Sathio in 1996. Crown Group has since  established a portfolio of projects under construction and in the pipeline worth $5 billion.

He iterated that it was a great coup to have both Kuma and Takada collaborating on the project.

“Kengo Kuma and Koichi Takada each have their own unique style and ethos and are true leaders in their field, renowned for their creativity. I feel the collaboration of the two will lead to something new and unique for Sydney,” Sunito says.

“We are excited to be able to take the next step in furthering the path of Sydney as it becomes increasingly recognised for its leading architecture.”

Kuma founded Kengo Kuma and Associates, Inc. in his home nation Japan in 1990. Last year the company made its first foray into Australia designing The Darling Exchange, a six-storey public building in Darling Harbour followed by a 25-storey hotel in Sydney’s Circular Quay. Kengo studied at Columbia University in New York City and made last year’s Dezeen Hot List.

The ‘stacked forest’ apartment building at the heart of Mastery by Crown Group will be Kengo Kuma and Associates’ first residential project in Australia.

“Our intention is to give a warm and a natural atmosphere to the community with unique design strategies,” Kuma says of the 19-storey residential tower.

“The upper volume of the tower seamlessly transforms into the lower part of the stepped terraces in order to create an intimacy between the building scale and the pedestrian scale on the street level.

“Eaves wrapping the façade are covered by sticks which give a warm impression of the wood to the façade. The entire façade becomes a vertical urban forest by having vegetation on each eave.

“Those strategies will blur and soften the profile of the building, and give a whole new image of the Mastery by Crown Group precinct of the Waterloo,” Kuma says.

Japanese-born Sydney-based architect Takada has designed three of the five buildings at Mastery by Crown Group. Takada began his career in Tokyo and moved to Sydney in 1997. His firm Koichi Takada Architects has won multiple awards for its residential, retail and hospitality designs.

“It is my honour to work alongside Kuma sensei, the Japanese master of architecture. It is a dream come true,” Takada says.

“I drew on an idea of ‘green luxury,’ finding inspiration in nature. Each building is designed with a ‘human touch’ to express its organic and distinct architectural character.

“Responding to Kengo Kuma’s vision for the tallest of the five buildings, I am excited to design three low-rise buildings that create a dynamic architectural dialogue within the precinct,” Takada adds.

With more than 40,000 jobs expected to be created in the Green Square area by 2030, the development will be home to hundreds of new Waterloo residents when completed in 2021.

“Crown Group’s on-going vision for Waterloo will continue to positively regenerate the area’s former industrial warehouses with an ‘organic’ and ‘healthy’ green neighbourhood, celebrated by their signature resort-style living for residents and a new street culture to benefit the public,” Takada says.

Construction is scheduled for completion in 2021. Mastery by Crown Group will be unveiled at a VIP event on Thursday 18 October at the Royal Hall of Industries.