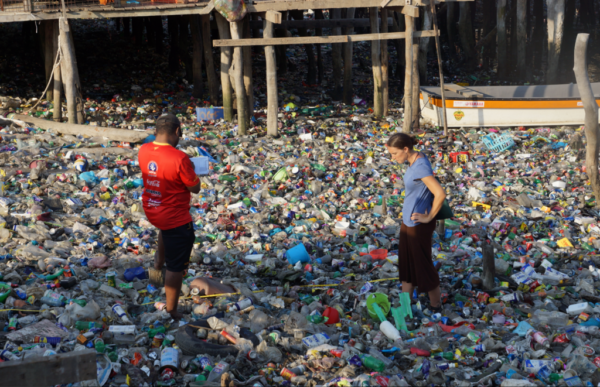 CSIRO is undertaking the world’s largest marine pollution survey, working with countries across the globe to help them assess and reduce the amount of litter entering our oceans.

Some of the world’s top 20 polluters will take part in the project including China, Bangladesh, Indonesia, Vietnam and the United States, plus other countries including Australia, South Korea and Taiwan.

CSIRO senior scientist Dr Denise Hardesty says the project would provide hard numbers on the amount of litter entering the ocean by using real data collected on coastlines and cities across the globe.“Up until now we’ve been relying on estimates from World Bank data, so this will be the first time anyone has brought together a group of countries to look at exactly how much litter is entering the oceans,” Dr Hardesty says.

“We will be able to see where the hotspots lie by looking at how people, wind, the shape of the land and storm water moves rubbish into the ocean and then give advice on how to improve this based on science-based interventions.”

Representatives from five partner countries will meet next week in Korea for the project’s first training workshop.

Our Seas of East Asia Network’s Dr Sunwook Hong will lead South Korea’s involvement in the project and says taking a global approach was essential to tackle the problem.

“By coordinating our approach we will be able to achieve some quick wins and know where to set our sights for more long-term goals,” Dr Hong says.

The project was announced two months after Dr Hardesty presented to the world’s first G20 summit on marine pollution and on World Ocean Day, which in 2017 is focused on plastic pollution.

“We know that almost all litter starts off in someone’s hand, and from there it finds it ways from land to the ocean, where it breaks up into smaller pieces,” Dr Hardesty says. “This means if we can stop the rubbish from entering the ocean, we can make real headway in resolving the problem.

“Along with causing marine and environmental problems, things like plastic bags can also cause storm water drains to become blocked, leading to significant localised flooding and serious health risks for local people.”

The project follows years of marine debris research led by Dr Hardesty and her team which has published significant findings including quantifying the amount of litter on the entire Australian coastline and reporting on the number of seabirds and other wildlife eating plastic.

The project is a collaboration between CSIRO, Schmidt Marine Technology Partners and the Oak Family Foundation.

BY ON 15 June 2017
This article also appears in Corporate Waste Solutions.