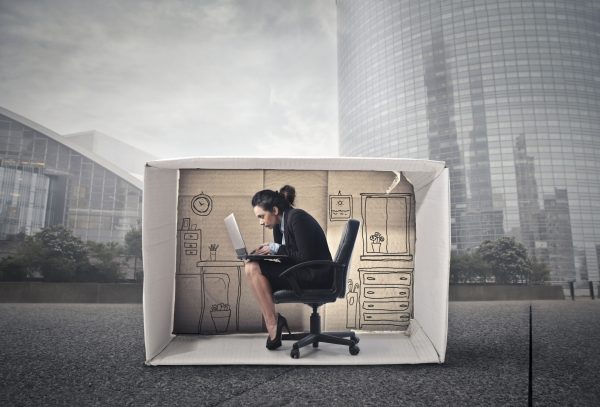 On Boxing Day this year Alexander Payne’s first film since 2013’s Nebraska will hit Australian cinemas. While this month the latest Mezzanine magazine will appear on the newsstands with nearly a dozen pages all devoted to the same topic. And in October two very particular homes went under the hammer in Melbourne for the very first time.

What do all these apparently disparate factors have in common? The answer is size. Simply size.

The new cinematic offering from Payne, who previously gave us films like Election, About Schmidt, Sideways and The Descendants, is called Downsizing and it’s a fanciful, and at times touching, satire about a man (played by Matt Damon) who joins a growing movement of people who get scientifically shrunk to a few centimetres, as a way of dealing with space issues caused by an ever-growing population problem.

Those two homes? They were tiny homes. Tangible examples of the groundswell grass roots movement for people determined to shrink their footprints.

The sale saw a 14.4-square metre home snapped up for just $56,000 – the prize of a second tier luxury car. It was estimated that 10,000 people came to view the properties prior to the sale, with 2000 attending the auction.

And those pages in Mezzanine? Yes, the same again – all about small spaces and the people who design and inhabit them.

There is definitely something in the air. But what does this have to do with facility management, particularly in the commercial space, you may ask? Well, offices and other commercial spaces are not immune to the zeitgeist. And while the likes of Apple may be in the process of moving its 12,000-strong US workforce into its massive new 70-hectare ‘spaceship’ campus in Cupertino, California, elsewhere across the globe, companies are shrinking their footprints – moving to virtual workforces, utilising smaller serviced office spaces or exploring the joys of shared environments in co-working spaces.

A couple of facts about co-working:

This means we’re looking at a growing trend for the future. It also means we’re looking at a working environment where space is incredibly valuable. In a co-working or serviced office space, there simply isn’t room to spare and every square metre is prized. In a property market of ever-skyrocketing rents this is equally true in stand-alone or traditional businesses. It therefore makes no sense to implement initiatives such as activity-based work systems, often with fewer desks than staff, while installing large pieces of infrastructure and other building systems.

One of the areas that can be overlooked or subject to misunderstanding is boiling and chilled water filtration systems, with specifiers or facility managers erroneously thinking that such systems would take up too much prized real estate. This is particularly important when considering the storage in these smaller workspaces, which is nearly always in very high demand. But it is possible to find systems that are half the size of the traditional units, with a neat underbench unit footprint measuring as little as 340 (height) by 180 (width) by 500 millimetres (depth).

So, instead of the underbench cupboard space entirely taken up with equipment, there is still plenty of room for storage of dining ware, cleaning utensils and products, or whatever else needs to be stashed safely and unobtrusively out of the way.

Other alternatives in the boiling and chilled filtered underbench water system space boast the unique water-cooled technology, which
still has a small footprint, but does not require cupboard ventilation offering more storage space in under the sink.

To add a neat flourish to the whole space-saving design of the best contemporary boiling and chilled water systems, you can even add
a swivel mixer tap as part of the installation allowinguserstoswingthedispenseroutofthe way if more sink space is required.

But is there a trade-off? Does a reduced footprint also necessitate a reduced aesthetic appeal? Well, you just have to ask those 2000 intrigued tiny home lovers, who will no doubt answer firmly in the negative.

With a wide variety of dispensers and sink tap mixers available, specifiers can choose from elegant designs including gooseneck or square mixer tap options.

There are special finishes too, including matte black, brushed brass, platinum and gun metal grey. But contemporary designs have gone further than simply aesthetics. Accessibility has now been considered also with lever, touch and remote control designs available for people who find it difficult to operate fixtures manually. Plus, it’s possible to get different coloured levers on dispensers to provide full vision options where LED indicators are not easily visible, along with Braille pads for vision impaired users.

Population growth is certainly a pressing issue and the need to save space in in offices and homes is only going to become more important. But the great news is we don’t have to give up our most useful fixtures and fittings or the pleasures of beautifully designed products to address it.