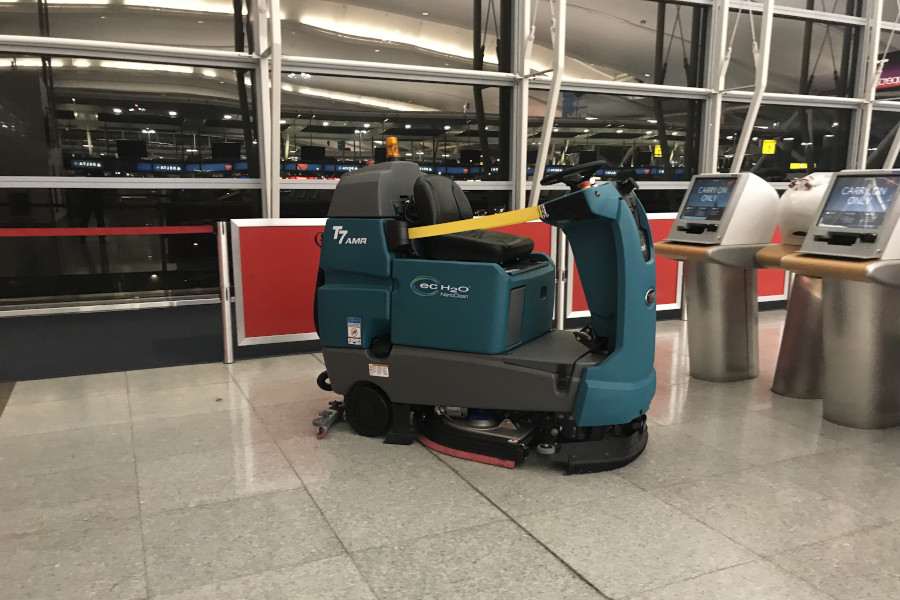 In this edition of FM Workspace360, we take a look at Tennant’s autonomous floor cleaner and the future of robotic cleaning in Australia.

In the first quarter of 2020, Tennant will release the T7AMR autonomous floor scrubber in Australia. While the machine certainly appears to look like those already in use in facilities across the nation, it’s what can be found inside that counts. Powered by advanced vision-based artificial intelligence (AI) system BrainOS, the T7AMR can be turned on and left to do its job in a real-world environment without further input from staff.

How does it see?

Perhaps the most common question facility managers and users alike want answered is ‘how does the T7AMR see?’ The machine uses three types of cameras that combine to identify the environment it has been deployed in, localise its position within that environment and detect and avoid obstacles.

Two Light Detection and Ranging sensors known as LIDARs scan the area around the front and sides of the machine. One is located four inches from the ground, while the other is located three feet up so that they can detect a range of hazards and react accordingly.

Three 3D cameras allow the machine to recognise its environment and location in relation to obstacles.

Finally, three 2D camera provide a point of reference for the machines. Not only do they take photos that help it determine where it has cleaned and where it needs to return once its task is complete, but it can take photos of obstacles and any other issues and send them to relevant facility staff for rectification.

The benefits of robotic cleaning

A good cleaning job goes unnoticed. A bad cleaning job gets noticed by everyone. According to FranchiseHelp’s Cleaning Industry Analysis 2019, the average cleaning company loses up to 55 percent of its customer base every year due to poor service. For facility managers, especially those operating assets such as grocery stores, shopping centres and big box stores, that can directly result in a loss of business.

Robotic cleaners have the potential to play a major role in eradicating this issue. Not only is the software driving these machines designed to be more efficient than humans performing the same task, but the machines free up staff to complete other tasks that only humans can perform (for now, at least).

The automation of the immediate future

The T7AMR doesn’t just represent the future of floor cleaning, but also the future of automation on a far broader scale. Based on the original T7 scrubber launched in 2003, the machine hasn’t been completely redesigned to highlight the new technology at its core. It doesn’t need to be. The look doesn’t matter.

What does matter is how automation software can be embedded into existing products and systems to make it more accessible and viable. Nobody may sit in the T7AMR’s seat after the machine has learnt to recognise its environment, but the fact that it has a seat reminds us that the road to automation won’t be travelled in leaps and bounds but in steady, considered steps.