A revolution in door design 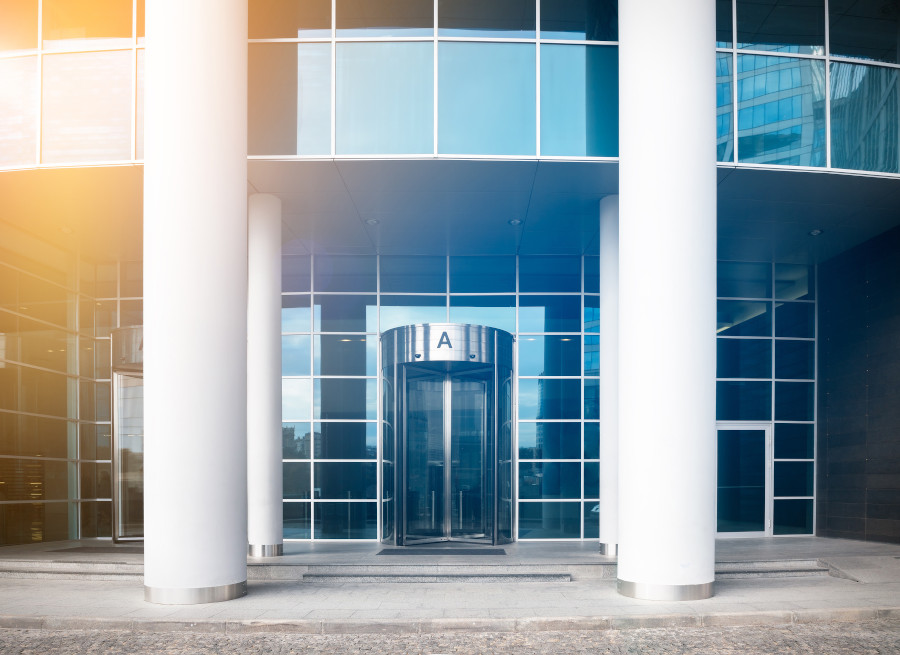 Great Inventions in FM reveals the revolutionary products that have become mainstays in so many facilities. Here, ROB HAY takes a look at the revolving door.

With revolving doors being so ubiquitous, few of us would give a second thought as to how revolutionary the design proved when it was patented back in 1888.

As with so many of the inventions we now take for granted, it’s easy to underestimate the creative leap that took Philadelphia native Theophilus Van Kannel from a conventional hinged door to one made from three ‘wings’ revolving around a central column within a circular vestibule.

So, if necessity is the mother of invention, why did Van Kannel feel the need to reinvent the door? A quick trawl through some of the less reputable pages of the internet throws up some share-worthy notions.

The first supposes the design was intended to stop horses entering buildings. Given the invention predates the automobile, and horses were certainly a common feature of late 19th century city streetscapes, it seems plausible. However, given how ill-equipped horses are to open conventional doors, it seems unlikely their unwelcome presence in upmarket buildings was the necessity that inspired Van Kannel’s design.

Perhaps, as others suggest, it was actually a disdain for chivalry that inspired the revolving door. A lifelong bachelor, Van Kannel was said to have resented the convention that led men to hold doors open for women so that they could pass through first.

It’s certainly amusing to explore such unfounded speculations. Maybe that’s why they gain traction. However, a look at the patent for Van Kannel’s design provides the most clues as to its raison d’être.

In his patent application, Van Kannel refers to his invention as the ‘Storm Door Structure’. In outlining its benefits, he says the design is noiseless, and prevents the entrance of wind, snow, rain and dust. Furthermore, it couldn’t be blown open by the wind… or horses, presumably.

Herein lies the central simplicity and beauty of the revolving door. As the three wings turn around the central column, they create a situation where the opening of the entrance door closes the exit, and vice versa.

Another benefit – likely an unintentional one, considering the date of Van Kannel’s invention – is its ability to mitigate what is known as the stack effect. This results to the movement of air, either from the bottom or top of a building, causing a pressure difference between the inside and outside.

Understandably, the effect is more pronounced in tall buildings.

One aspect of the design that can be considered both advantageous and disadvantageous is that it limits the flow of people entering or exiting the building. This can be a good thing when a building or facility owner wants to slow and easily control entry for security purposes. In the event of an emergency, however, this can be a liability.

In 1942, a popular Boston nightclub called the Cocoanut Grove caught fire, leading to the death of 492 people. The high number of casualties was attributed in part to the single revolving door at the front entrance, which quickly became jammed with people trying to flee the flames.

As a result of the tragedy, new safety measures have since been implemented. Most now require that the wings of the door be collapsible in case of emergency to allow a free flow of people. It’s also a common requirement for hinged doors to be installed beside revolving doors.

Despite the incident that unfolded at Cocoanut Grove, the revolving door remains an important part of modern building design.

Unlike some inventions that are considered before their time, Van Kannel didn’t need to wait long for his design to gain traction. Only one year after he filed the patent for his Storm Door Structure, he was awarded the John Scott Medal by the City of Philadelphia in recognition of the usefulness of his invention to society.

This article also appears in the August/September 2018 issue of FM magazine.