How green is your laneway: Melbourne’s $1.8 million project 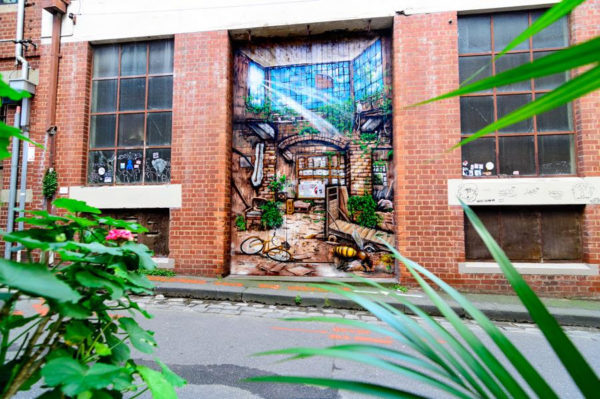 The City of Melbourne has unveiled the revamped Coromandel Place: the first of four laneways to be upgraded as part of the $1.8 million ‘Green your laneway’ pilot program.

“The residents and business owners in Coromandel Place supported this rejuvenation to help entice people to this hidden part of the city. The laneway has been transformed with planter boxes, trees, pot plants and two murals by local street artists,” says Lord Mayor Robert Doyle.

“The 14 planter boxes on the western side of the laneway feature Boston Ivy and Creeping Fig, which both make attractive wall covers. While the walls are quite sparse now, we expect them to be covered in greenery within around five years.

“There are more than 200 lanes in our central city and they offer great opportunity for renewal. We can transform these laneways with plants and trees to help cool the city, improve air quality and clean stormwater.”

The most important work in the laneway has been completed underground. The bluestone kerbing and asphalt was dug out by hand and replaced with new soil and irrigation systems to allow the new plants to thrive.

Where greening was not possible due to underground services and traffic requirements, murals have been incorporated to beautify the laneway. The works in Coromandel Place include a two-story mural by Ghostpatrol and a separate mural by Al Stark on the walls of the Uniting Church.

The other three pilot laneways include Guildford Place, Meyers Place and Katherine Place. They were selected based on more than 800 public nominations and expert advice from a panel of engineers, sustainability professionals, place-makers and landscape architects.

The City of Melbourne has worked closely with the owners, residents and workers to consider which type of greening would suit each laneway.

Chair of the City of Melbourne’s Environment Portfolio, Cathy Oke, says the works on Guildford Lane are about to begin, with artist Mike Makatron completing a mural depicting an overgrown factory.

“Guildford Lane’s residential community has worked with us on a design that includes climbing plants and pots to complement the laneway’s beautiful brick warehouses. We’re also installing a community garden for residents along with a series of innovative ‘drain-gardens’ to capture rainwater and reduce flooding.

“These drain gardens have never been installed in Melbourne before. We’ll use stainless steel grates to intercept water from the down pipes to filter out particles and other pollution that has settled on the roof,” Oke says. “Instead of using potable water we’ll use the drain gardens to nourish the Gum Vines, Chinese Star Jasmine and other hardy species that we’re planting.”

Image courtesy of City of Melbourne.