KarTent’s cardboard tents are the answer to festival waste 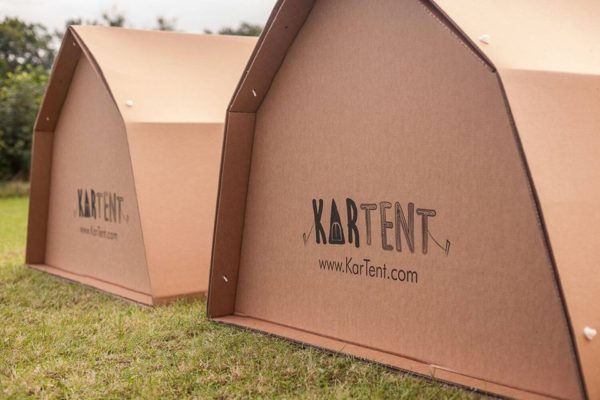 A Dutch start-up company, KarTent, is working towards a sustainable solution for festival camping gear. Every year, at countless festivals and gatherings across the globe, camping accomodation is discarded and abandoned after the event, contributing a shocking amount of unnecessary and damaging waste to landfill.

KarTent launched its innovative and sustainable solution to this problem in the Netherlands in 2015 by introducing its eco-friendly, 100 percent cardboard tents. These recyclable alternatives to traditional camping accomodation took off in the Netherlands and spread rapidly across the border to most Western-European countries in the following year. In March 2017, KarTent won the prestigious Red Dot Design award and is excited to bring its revolutionary festival accomodation to Australia.

A recyclable cardboard tent, you might ask? On average one in four people across the globe leave their festival tent behind after an event. Reasons for leaving tents behind include (but are not limited to) laziness, damage and bargain pricing. The result of this is a significant amount of non-biodegradable garbage. KarTent aims to be the environmentally conscious, cost-efficient festival accommodation solution to overcome this issue.

Jan Portheine, co-founder of KarTent, says, “Every tent that gets left behind, broken or not, mostly ends up in the trash. It is already made from poor quality materials that are hard to recycle or reuse, which is bad enough, but it will also end up at the garbage dump. There are tonnes in the  trash every year.”

This appalling waste led Portheine and business partner Wout Kommer to develop the KarTent. Portheine says, “The KarTent is made from regular cardboard that you don’t see everyday. It is a lot thicker than normal cardboard but it doesn’t have any coating to make sure it is recyclable. It will also stay dry during your event since the water will never penetrate and the structure won’t collapse.”

Due to its effective design and use of materials, the cardboard structure is able to absorb up to 400 percent of its own weight in water and can retain its integrity even in wet conditions, as was proved at some very rainy events last year. It is more energy-efficient in production, emitting just half the amount of carbon dioxide of a traditional tent, and is completely recyclable after use.

Portheine says that the product works towards global sustainability; “the KarTent can be produced for less CO2 from a combination of a natural material (wood) and old paper, and after being used it can be reused or recycled. It also doesn’t need to be cleaned and paper recycling plants are always close by and very efficient.”

The reaction to KarTent has been “absolutely fantastic”, Portheine says. “Within two years of launching, KarTents can be found in 18 countries around the world. Festival goers also love the more subtle features such as the tent remaining darker and cooler on hot mornings and the ability to decorate the outside of the shell, which has seen some out-of-this-world designs and creations!”

KarTent will launch in Australia at the Yours and Owls festival in Wollongong in September, and its founders are excited to see how Australians will adopt the revolutionary festival accomodation solution. Portheine says, “After two great seasons in Europe, we’re really proud to launch at our first festival Down Under. It’s a dream come true launching our product in Australia and to bring the cardboard revolution to the other side of the globe.”

Destination Wollongong general manager, Mark Sleigh, says Yours and Owls is the perfect partner for introducing KarTent to Australia.

“What better way to introduce a fun, affordable accommodation solution than a cracking music festival over a long weekend, beside the beach, in a city that has transformed into a creative hub hosting a vibrant small bar and café scene, all just a stone’s throw from Sydney. Wollongong is proud to welcome this eco-friendly initiative to Australia – which Wollongong City Council has committed to recycling as garden mulch – and it’s another feather in our cap as a major events destination.”

When asked what the future looks like for KarTent, Portheine responds, “We are trying to expand the cardboard revolution globally. We will look into making new products from old KarTents to reduce waste at events even more. Maybe in the future you will be sitting on an old KarTent in front of your new KarTent.”

Visit Facebook.com/kartent to see what happens when it rains.