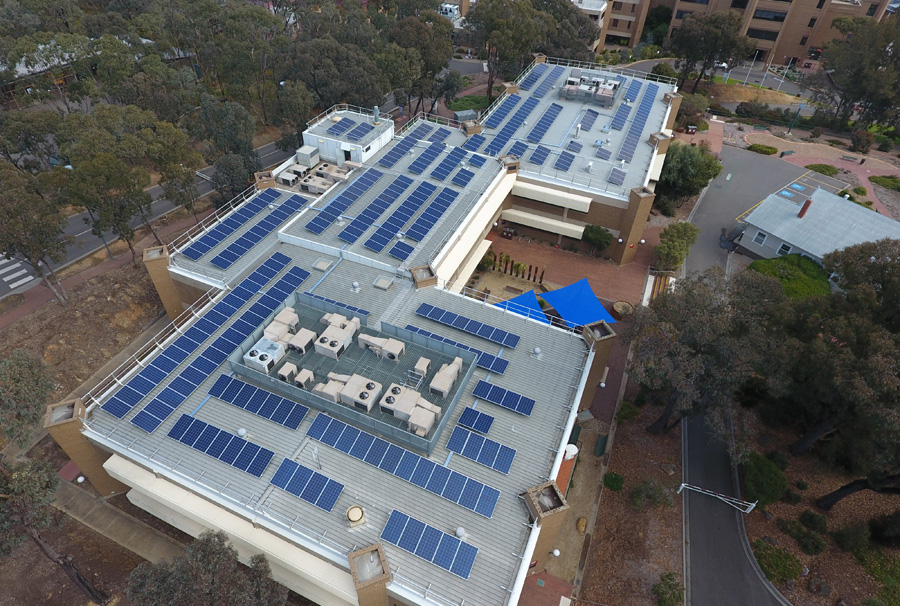 In total, 20 projects will be undertaken as part of a $75 million initiative that is expected to see the university hit its net zero emissions target by 2029.

The initiative was launched by Professor Dewar and University Chancellor John Brumby at an event held at the university’s campus in Bundoora. It includes the installation of more than 7000 solar panels on 27 buildings across the Melbourne campus, starting next month. That’s the equivalent of more than 17 kilometres of panels laid end-to-end, or more than 400 home solar systems. At peak efficiency, the panels will supply up to half of the campus’ daytime power needs. Over 3300 solar panels have already been installed on rooftops at regional campuses in Mildura, Shepparton, Bendigo and Albury Wodonga.

“La Trobe recognises the social, environment and economic importance of reducing our carbon footprint. That’s why we have set an ambitious target to become the first University in Victoria to meet this important goal,” says Vice-Chancellor Professor John Dewar.

“Not only is reducing our carbon emissions the right thing to do, it also makes good economic and environmental sense. Rather than simply buy carbon credits, we’ve got a clear plan for action and we are making genuine, local changes to become more efficient and make a deliberate switch to renewables.”

Other elements of the initiative include 50000 high efficiency, low cost LED lights that will be progressively installed in and around university buildings to permanently reduce overall power consumption. A large-scale composter has also been set up at the Melbourne campus. The composter is capable of turning the equivalent of 100kg of organic waste into 20kg of nutrient rich, eco-friendly fertiliser for campus gardens and grounds on a daily basis. Ultimately, 100 percent of campus organic waste will be diverted from landfill, reducing harmful greenhouse gas emissions.

La Trobe is also harnessing its in-house research and technology expertise to reduce emissions. World class data analytics researchers and their students are designing and implementing the La Trobe Energy Analytics Platform (LEAP) – not only monitoring energy consumption in up to 50 smart buildings, but also making lighting, heating and cooling adjustments in real time to reduce energy consumption.

La Trobe is Victoria’s only state-wide university, with significant landholdings right across the state, and not just on its campuses at Mildura, Bendigo, Shepparton and Albury-Wodonga. The university is present in different climate zones throughout Victoria, including areas of the state which receive high levels of sunshine year-round. This means the University is also in the early stages of investigation with industry and government to assess the viability of solar farms on university land that will not only create clean energy, but also provide an opportunity for research and innovation.

Natalie MacDonald, vice president of strategy and development, says the initiative marked the obvious next step in the university’s long-term sustainability plan.

“Our Net Zero commitment builds on the great sustainability work already underway. A diverse eco-corridor runs through our Melbourne campus. We were the first Australian University to commit to divestment of fossil fuel intensive investments in 2016. We are the first University nationally to receive a six-star rating for sustainable large-scale developments and our University City of the Future plan is embracing best practice green building practices.”