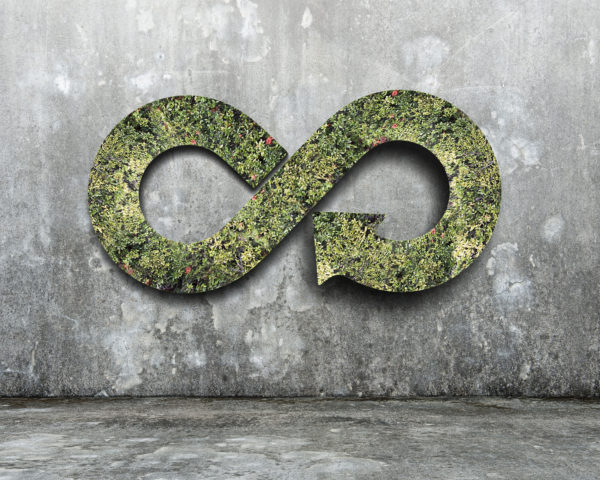 As with a great many initiatives designed to break the linear mould of ‘take, make, waste’, it seems the European Commission is showing the world the way forward, recently establishing a legal framework to foster a circular economy throughout its member nations and adopt a zero-waste program.

The Commission considers this move will result in a range of tangible economic and environmental benefits – a boost to recycling, the prevention of the loss of valuable resources and the reduction of greenhouse gas emissions, along with economic growth, job creation and new business models. For governments the world over, the benefits would seem to be compelling.

The framework’s goals are to recycle 70 percent of municipal waste and 80 percent of packaging material by 2030 – achieving that, and other measures, the Commission says has the potential to save businesses in the EU around AUS$880 billion. A recent article in The Guardian identified five countries that have already moved beyond this EU framework – Denmark, the Netherlands, Scotland, Sweden and Japan – so what’s stopping Australia and local business from enjoying similar bottom line impacts?

Grant Musgrove, chief executive of the Australian Council on Recycling (ACOR), says there is a series of barriers here – mainly emanating from government policy, or the lack thereof.

“By and large, government policy in Australia, be it local, state or federal, is based on the linear model of the waste hierarchy,” Musgrove says. “This is standard practice, without much in the way of discussion or debate. But the way to make policy for circular models is very different. This is something that is widely accepted internationally, but not yet front and centre of policy-making here, although there are some notable exceptions.

“We’re also seeing an increasing rate of material complexity that is harder to, both commercially and technically, recover resources – and that increases the cost per unit of recycling. Unlike Europe, we’re not legislating around sustainable design.”

THE ROLE OF ACADEMIA

Musgrove says another major barrier to formulating and adopting circular economy policy is the role of universities.

“They are teaching graduates only the one tool and that’s life cycle analysis, which throws up some hopeless boundary issues and questions about how things are calculated,” he says. “All we get out of it is some fancy modelling where boundaries are drawn and subsequently often misused by companies in greenwashing. They can justify using the lowest cost materials while still seeming as though they’re aligning with environmental outcomes.”

A LINEAR MINDSET AND REVENUE FLOWS

Musgrove says governments don’t focus on sector profitability or the sustainability of industry development, and that is the biggest barrier to developing circular policy.

“One of Australia’s biggest challenges is to ensure the economy is not so reliant on the mining industry,” he says. “Governments are more than happy to give billions of dollars in subsidies to mining industry for virgin resources, but they should be subsidising what they want to happen and taxing things they don’t want to happen – and there’s a whole debate on what should be supported in terms of virgin versus secondary or recovered resources.

“We’ve seen recently a company seeking government support to build a rail line for a new coal development. Businesses involved in secondary resources would love that kind of support, but the Government is stuck in a linear mindset and propagating that model.

“If we go down a level to state jurisdictions, pretty much all state governments are hooked on the revenue they get from landfill and, while there are programs and initiatives to recover and recycle resources, there are always going to be unavoidable residues. For example, we could recover 75 percent of the resources contained within a car, but the rest might be complex plastics that have been co-mingled and can’t be recovered – they go to landfill.

“In those sorts of cases, sustainable industries are effectively being taxed for things they can’t avoid. As such, it becomes harder to run sustainable businesses and move towards a circular economy.

“Waste levies can be inherently good or bad. A badly designed waste levy is very destructive to the recycling industry. But governments accumulate these funds and they prop up a great many state budgets. It is, ultimately, holding back industry development and a move to a more sustainable economic model.”

Musgrove says Victoria’s sustainability fund is wholly derived from landfill levy revenue. “It has around $500 million in accrued funds – around 20 percent of the State Government’s entire budget surplus – and it’s sitting there instead of being used for its intended and legislated purpose, to do things – enhance resource recovery and for climate change initiatives.”

Victoria does have some very strong sustainable businesses and industries, according to Musgrove. “SMEs in Victoria are getting access to a lot of education, resources and training to make their businesses more resource efficient. That may not be a game changer, but it is generating some good local outcomes and case studies.

“But there are some very high-profile successes, such as Visy. People might see them as a provider of kerbside services, but Visy has been able to develop circular economy strategies that insure the company against material depletion or price volatility and ensure they have the material inputs for their packaging business. It makes price fluctuations in commodity markets almost immaterial for companies like that.”

Musgrove points to Green Industries SA doing a significant amount of work to develop circular economy initiatives and businesses. “They’re working out ways of commercialising waste and resource recovery programs, in partnership with Innovyz. There is a capital fund for circular economy investment aimed at both start-ups and businesses already operating that want to scale up.”

Innovyz is a South Australia-based incubator that offers nine-month mentoring programs, aimed at developing consistency, scale and governance in the commercialisation of ideas. Musgrove is involved in the mentoring program, designed to help South Australia build a more resource efficient economy. “South Australians are a tenacious bunch,” he says. “They’ve seen the withdrawal of some large historical industries, but they’re not doing badly at all economically.

“New South Wales also has some very good programs, especially in the B2B space. A previous environment minister there, Rob Stokes, was right into this.” Musgrove says governments need to recognise positive externalities of recycling as well as other elements. “Under the Emissions Reduction Fund (ERF) landfillers have secured huge amounts of government money for capturing gases. They shouldn’t be receiving money for not spewing methane into the atmosphere – that should be the law. Instead, governments have chosen to pay landfillers rather than use the ERF for recycling.”

Musgrove says ultimately ideology is at play in Australia.“Is there a likelihood of getting bipartisan political support to achieve the right policy settings?” he asks. “Well, we’re not seeing much bipartisanship going on in Australia at the moment. The nature of our federation is problematic and partisan politics come to the fore. That makes coordinated efforts across the country quite difficult.

“And that means we take baby steps, ticking off one thing at a time, rather than formulate an economic development strategy that is sustainable. Until there’s a crisis, I’m not sure we’ll see anything different.

“The shambolic energy debate at the moment is testament to that. Something as fundamental as where we’re going to get our electricity from has been studiously ignored by governments until there was a crisis – and even though the Finkel Review [into the Future Security of the National Electricity Market] has provided a perfectly logical and sensible approach, political parties are continuing to trip over themselves.

“We shouldn’t need to have a crisis before we have a plan. We do have vast virgin resources, but there are huge negative externalities in digging those up, transporting them, remediation of mining sites. There are already ghost towns being left behind and that’s unsustainable from any point of view – governmental, economic, environmental and social.

“My fear is that it might take a nasty recession and a macro-economic event for governments to act to diversify our economy – and their own revenue base.”