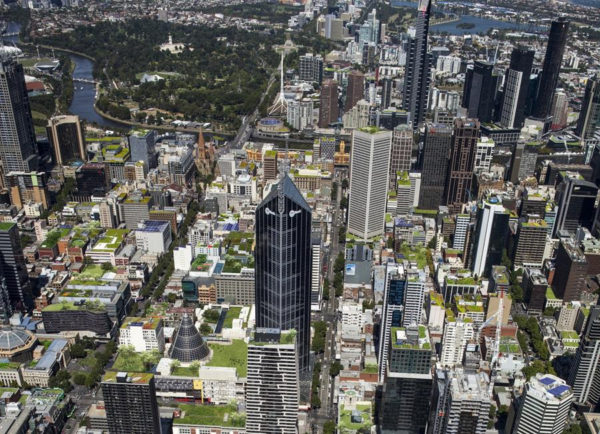 The City of Melbourne will allocate $1.2 million to a new Urban Forest Fund to encourage more greening in the city – the most effective way to protect us against extreme heat.

The City of Melbourne will partner with philanthropists, property developers, community groups and other government organisations on greening projects.

“The initiatives could include planting trees, creating parks, green walls, roofs and facades and stormwater projects. We will match successful projects dollar for dollar to leave a green legacy for our city,” the Lord Mayor Robert Doyle says.

“As well as protecting us from extreme heat, our trees and parks are a major contributor to Melbourne’s liveability. The City of Melbourne is increasing public green space and planting 3000 trees a year. This initiative, to stimulate greening of private property which represents 73 percent of land in our municipality, is the next frontier.

“Green infrastructure is fundamental to help cities respond to the challenges of climate change, urban heat, flooding and population growth,” he says.

Doyle launched the Urban Forest Fund on Wednesday on the top of the new Victorian Comprehensive Cancer Centre, the home of Peter MacCallum Cancer Centre, which features one the largest rooftop gardens in Australia at 1400-square-metres.

The Urban Forest Fund has $1.2 million in seed funding, which the City of Melbourne aims to grow to $10 million through contributions from organisations and individuals who want to create a greener city. For every dollar that a private investor pays into the fund, the City of Melbourne will provide an additional dollar towards a greening project.

The City of Melbourne has created a world first online tool which maps all the rooftops in our municipality to see if they have the potential to be turned into solar, cool or green roofs.

Chair of the City of Melbourne’s Environment Portfolio councillor Cathy Oke says expressions of interest are being sought from property owners and developers for potential green projects, such as green roofs.

“Our aim is to support new greening projects that otherwise would not be funded,” Oke says. “The City of Melbourne owns and controls only one fifth of the city’s land area, so we’re looking for proposals to create new green space on private property. This project could lead to the creation of new spaces that can capture stormwater to reduce flooding, reduce summertime temperatures in the city and create habitat for plants and animals.”

If $1 million was matched with a private donation a $2 million greening outcome could be achieved, which could create:

The chief executive officer of the Nursery and Garden Industry Victoria, Craig Taberner, says greening on private land would help create a healthier and cooler city.

“The establishment of an Urban Forest Fund by the City of Melbourne is an exciting and progressive step towards securing a green and climate ready future for Melbourne,” Taberner says. “Access to collaborative funding should energise and empower individuals and communities to take action, and share the responsibility of creating and maintaining the city’s green spaces.”

Making private donations for public or private city greening is not new. In 2013 Mirvac donated $200,000 to develop a five year temporary park in Yarra’s Edge, Docklands. The University of Melbourne has also donated $2 million to assist the City of Melbourne in an expansion of University Square in Parkville.

Facts about the City of Melbourne’s Urban Forest:

BY ON 1 June 2017
This article also appears in Corporate Waste Solutions.