My space – the future of workplaces and workspaces 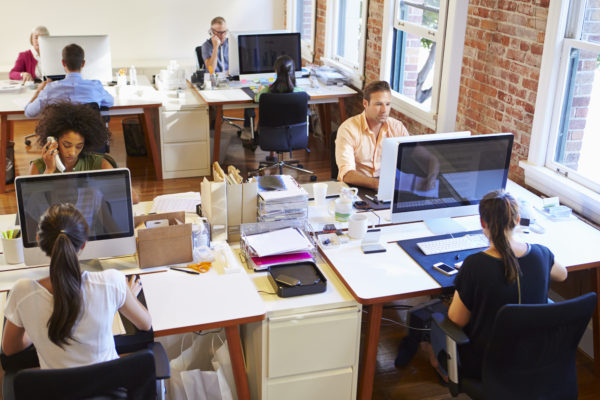 There are a lot of people walking around office buildings with clipboards or trawling through data ‘beamed back’ by sensors these days. They’re working out who’s at their desk, how long they’re spending there and where else they’re hanging out. In short – how the workspace is being, or not being, used.

As the nature of work transforms, so too will our workplaces. At the forefront will be facility managers – getting their heads around a quantum shift to deliver not only more useable, practical and efficient space, but also more enjoyable space.

What began with hot-desking and has evolved into activity-based working is now going to another level to change the
very nature of offices and buildings. Is this being generated by Millennial expectations? Chris Alcock, director at Six Ideas, a Sydney-based workplace innovation consultancy, says Millennials are definitely driving a change in thinking that businesses must address.

Alcock was recently part of a CoreNet panel that discussed ‘what Millennials want’. “One of the other panel members was Tica Hessing from Cushman and Wakefield, who was representing Millennials,” he says.

“She contended, and I’ve heard the same sentiments from many other sources, that Millennials are not interested in jobs for life – they want experience and a range of opportunities that interest them. They want to be fully immersed and exposed to tasks and challenges where they can learn from the experience and contribute at the same time; they’re not that interested in traditional structures or hierarchies.

“This is at odds with the traditional corporate real estate model, which is one of creating environments that are long-term. Companies take leases for 10 years and structure them as self-contained environments. They have levels of security designed to make it difficult for outsiders. Technology is specifically for employees within the company. Millennial expectations are making us challenge that model.”

At its most basic, the whole idea of an office is being put under the microscope. Alcock says while Millennial workers want the freedom to work anywhere and this, as a concept, is gaining more traction among company leaders looking to reduce their physical footprint, there is no suggestion the idea of coming together is an anachronism. “This is a generation where technology has allowed them to work anywhere, but they still want to engage and connect with people and that’s the incentive to get them to come into a building.”

THE NEED TO BE FLEXIBLE

Alcock says the new way of working highlights “how much out of step” traditional environments are. “Generally, the amount of space companies would lease fluctuated only with economic cycles – there was a certain ease in predicting what the requirements would be over a 10-year lease. Millennials are now telling us that’s no longer the case.

“So much of what happens at work these days is because of habits drawn from the past, rather than the way we need to operate now.” Essentially, workplaces are evolving into a ‘humane’ environment. “They facilitate the human connection with other people sharing common interests, serving a common purpose,” Alcock says.

“It’s more than hot-desking – that’s all about saving money by saving space. There’s still an element of saving attached to activity-based working (ABW), but people are realising that ABW offers organisations great flexibility. There’s a need to disconnect the number of people from the number of desks or you don’t have the option to flex the size of your teams without increasing the real estate.

“Let’s look at the purpose of the desk. Originally it was to hold up the paper you were working on. We replaced the paper with a computer screen and hard drive. Now we don’t need those anymore to do our jobs. The rise of ABW is showing us the way to transition – people are realising that the way we’ve been doing work these past 100 years is increasingly irrelevant to what we need today.

“The future, and this will happen sooner rather than later, is the workplace will be a collaborative space. What we have now is a habit rather than a need and that is increasingly under threat.”

Alcock says that the advent of computers was the last great workplace transformation – shifting office work from process- based to knowledge-based. “The competitive advantage then came from the power of the computer. Now we’re seeing a competitive advantage for organisations that can harness new technologies and attitudes, to create new types of space and redesign how people work.”

WHAT DOES THIS MEAN FOR FMS?

The new office building won’t necessarily be about less space but, rather, different space, Alcock believes. “It will be space that is more geared to collaborative, team-based tasks – people who need to come together for something specific.

“At the same time, as technology continues to develop, along with people’s ability to work effectively with it, we
will see a different approach to the allocation of space. Cities are getting bigger; there’s pressure on transport, on infrastructure. We have to deal with congestion. We’re seeing a decentralisation of work; we have clients looking at a network of satellite offices rather than one workplace. Their people will get to choose where they go to work.

“Not a lot of organisations are ready for that because they don’t have the culture to support it, but it will come.

“And this is not easy to manage. Things are about to get really hard for facility managers. The traditional model is easy to understand. It has the same overarching characteristics – the space, the furniture. People adapt to the space and the technologies available. Security is easy to implement because there’s oversight of who comes in and who leaves.

“What we’re seeing, from organisations such as ANZ Banking Group, is that workplaces are providing options that teams can configure themselves,” adds Alcock.

“We shaped our workplace to accommodate flexibility, to provide a range of spaces people could work in and enjoy other facilities too, such as a wellness centre, food and beverage outlets, a gym as a tenant,” she says.

“But we developed what we call the ‘Playbox’, which is a new workplace methodology that reflects how people work – in pairs, as individuals, client-facing, in teams. Having that human-centric knowledge of how employees want to work, we matched it with a ‘kit of parts’ – different suites of furniture, highly mobile implementation – so that people could shape their own environment. Our younger, more digitally inclined, workforce loves that engagement and control. This is something we’re now looking to roll out more widely.”

Langan says the transformation has been led, in part, by Millennials, but believes it’s also a recognition of changing technology. “We have more people working flexibly, more contingent workers. Some people stay home to focus on doing a report and come in to collaborate. Work patterns have changed.

“The idea of ‘here’s my office, here’s my desk’ – it’s a bit last century, but we mustn’t underestimate that relinquishing the individual desk is still a big thing. We need to give people a sense of ownership of their space and a way for them to determine how it’s shaped and used.”

The implications for facility managers are clear, Langan says. “We need to work with the unknown. Designing a space is one thing, but what it looks like when it comes to be may well change. As a result, we look for our facility managers to offer support to more mobile environments with lighter weight components. We look to have minimal built space and use assets other than physical walls to mark particular areas.

“We need to gradually change the expectations of the FM team, away from many of the traditional aspects of the role that can be automated now, so they can provide us with greater versatility. They focus more on moves – adding things in, changing things around – but we’re also looking for them to work with us to heighten the experience of the workplace. For example, when our teams come to work during the school holidays, we incorporate some children’s programs; we have had a magician and more recently a petting zoo. We’re trying to take the initiative on providing events and activities that make our building an enjoyable place to come to work, a more engaging experience.”

GOING WITH THE TERRITORY

“When we looked at our data to see what we needed to provide in the office, we looked at how many people came into the office 70 percent of the time or more – every day, sitting at a desk. Twenty-two percent of people were in that band.

“People get territorial about desks because they want that immersive experience. We needed to port that to anywhere in the office, so people didn’t necessarily need or use a desk. We leverage technologies to help people realise this – VoIP (voice over internet protocol), instant messaging, screen sharing.”

Corbett says he leverages the facilities department when it comes to designing spaces in the myriad properties that he oversees. “They have a good understanding of what the employees are saying because they’re at the coalface. We brought them into the journey early because they’re very interested and engaged in the outcome – what the employee of the future will see is of value to them.”

Eminè Mehmet, chief executive of healthy and sustainable working environment consultancy WELL Space, says organisations need to acknowledge that the work/life balance is blurred. “There’s no longer any real division between the two,” she says.

“Today’s employees are expecting more convenience and more flexibility. We’re always on, so we need to create an environment that helps reduce stress and enhance productivity. That’s coming from all age groups, but Millennials are very much into the environment and well- being. Work is an extension of their social life and they go to the office to socialise and collaborate. Increasingly, it’s becoming a more casual environment.

“Employers are understanding the link between the stresses of modern day living and productivity, so they realise they need to do something that attracts and retains their people. They can have the most amazing offices, but if their culture doesn’t support true well-being, then they’ll really be going nowhere. There’s a huge social responsibility for the leaders of the organisation to meet the requirements and expectations of the workforce in the new way of working. They could spend millions of dollars with designers, but if the culture isn’t right, it’s a waste of money.”