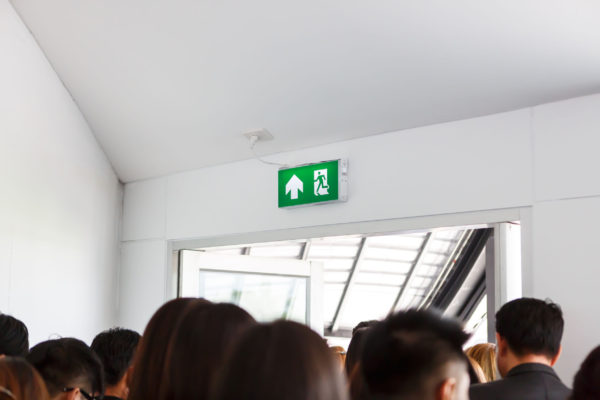 People have been congregating in public spaces and venues since we first left our caves. And wherever there is a mass congregation of people, there is always the danger that, should something go wrong, getting everyone out safely is a major issue. Recent dreadful events in cities including Paris (France), Taloqan (Afghanistan) and Manchester (the UK) have only underlined such a necessity.

For centuries, however, this wasn’t given the priority it deserved. But radical change is often prompted by a significant and/or shocking event or, in the case of the introduction of panic exit devices (PEDs), two events.

The first took place in 1883, at a magic show in Sunderland’s Victoria Hall in the UK. The stage magician offered free gifts, leading to hordes of excited children running down the theatre’s only stairwell, only to encounter a door at the bottom that opened inward. With hundreds of children pressing from behind, the door could not be opened and 183 four to 14-year-olds were killed in the crush.

Then, in 1903 at the Iroquois Theatre in Chicago in the US, a fire started on the stage and progressed through the venue. Without any form of egress available, 603 people — a third of the theatre’s capacity — died. Recalling similar segregation issues on the doomed Titanic, the audience members were divided by class, barricaded behind metal gates so that those in the cheap seats couldn’t sneak up to the second or third tier for a better view. When the fire broke out, everyone panicked, no one knew where to go and that catastrophic body count was the result.

Out of these horrors it was clear that developing methods of safe egress from a public building was imperative and on 29 February 1916 C J Prinzler patented the very first panic lock. Prinzler also formed a company, Von Duprin, which is still operating today. The intent of such a device hasn’t changed in over a century and the European standard EN1125 specifies the current requirements: “The main purpose of the performance requirements of this standard is to give safe and effective escape through a door with minimum effort and without prior knowledge of the device.” This means it is the standard for all locked doors on escape routes, where panic situations can be foreseen. Importantly, the emphasis for products covered by this standard is on a safe exit, above and beyond anything else, including security.

The whole idea of a PED is to provide a safe egress in an environment where the people involved may not know where the doors are or how to operate them. They could be in a smoke- filled room, but a fitted PED should make egress so simple and straightforward that a child could immediately open the door in an emergency situation. And if the aim of a PED hasn’t changed in over a century, neither fundamentally have the mechanics of such devices.

The basic principle is a bar that goes across the door and operates a latch. The bar is pushed and the door will open.

Traditionally, PEDs have been divided into either the push bar or the push pad (aka crash pad) concept. Basically these two types do the same thing – they fit across the entire width of the door, so that someone needing to exit doesn’t even have to know or see where the handle is on that door. Further, they don’t even have to use their hands to press it. It’s just the force of their body up against the door that will release the latch.

While most developed countries have their own standards and guidelines, in Australia the National Construction Code 2016 stipulates:

(i) a single hand downward action on a single device, which is located between 900 millimetres and 1.1 metres from the floor and if serving an area required to be accessible

(A) be such that the hand of a person who cannot grip will not slip from the handle during the operation of the latch; and

(B) have a clearance between the handle and the back plate or door face at the centre grip section of the handle of not less than 35 millimetres and not more than 45 millimetres; or

(ii) a single hand pushing action on a single device, which is located between 900 millimetres and 1.2 metres from the floor.

With the Fluid, the same principle applies. The door and the bar can be locked in the open position. Unlike conventional latches, the latch will stay in place, but when the door is pushed open, the latches will retract.

The Fluid has a completely new bolt system, high force resistant locking (500 kilograms at each point) and comes in both vertical and horizontal latching options. Unlike traditional devices, the Fluid is also very lightly sprung – under 20 Newtons, half the average. The crash bar can, therefore, be pressed with just the little finger, which means it is particularly suitable for such environments as schools and healthcare or aged care facilities. The other main advantage of this particular series is dramatically improved installation time, which has been halved compared to leading competitor products. To install a single point Fluid PED takes just 20 minutes, while a multi point takes an average of 33 minutes.