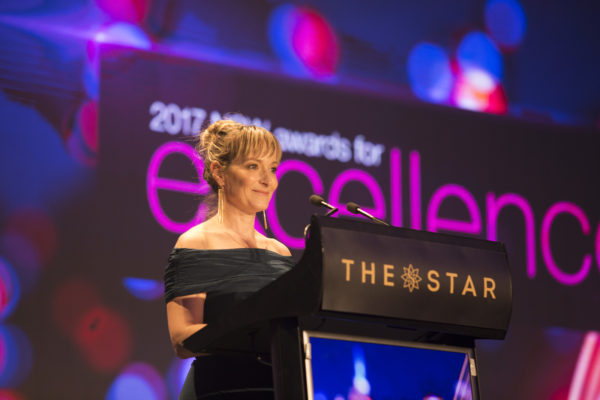 An industry-leading diversity strategy, an influential business leader, exceptional teams and talented tradespeople are among the winners of the 2017 NAWIC Awards for Excellence.

Hosted by the National Association of Women in Construction NSW Chapter, the 2017 awards attracted 61 entries across 11 categories.

More than 925 guests gathered at The Star in Sydney on Thursday 24 August for the 21st anniversary event.

According to NAWIC’s NSW Chapter president, Sarah Hogan, the awards celebrate both rising female stars and recognised leaders from across the property and construction industry, as well as the companies supporting and guiding female talent.

“Each year, the awards celebrate practical and positive changes occurring across the industry, and the number of award submissions grows as our female talent pool does,” Hogan says.

“More and more company leaders in our industry now see gender equity as a driver of productivity, innovation and enhanced financial performance. The rewards are great – as the individuals and companies acknowledged can confirm.”

A panel of industry experts selected winners based on strict award criteria.

The coveted Lendlease Crystal Vision Award for Advancing the Interests of Women in the Construction Industry was presented to JLL’s project director, Esti Cogger.

“The judges were impressed with the depth and breadth of Cogger’s influence within JLL. By conducting extensive focus groups and working closely with the JLL leadership across regions, Esti has made great inroads into the retention and promotion of women in her organisation,” Hogan says.

“The real-world results are exceptional – and include 100 percent of women returning to work after maternity leave over the last two years, a 38 percent increase in female promotions in JLL’s project development services business over the last six years, and remuneration parity for senior staff.

The HASSELL Award for Business Woman of the Year was presented to Juliette Economo of Downer Group.

“As national commercial and risk manager, Juliette is a well-respected and highly-influential member of her organisation with a broad range of achievements to her credit,” Hogan explains.

“Juliette demonstrates sound business skills, alongside an enduring commitment to her colleagues and the broader community. This is evident in her work as a mentor and the projects she undertakes.” 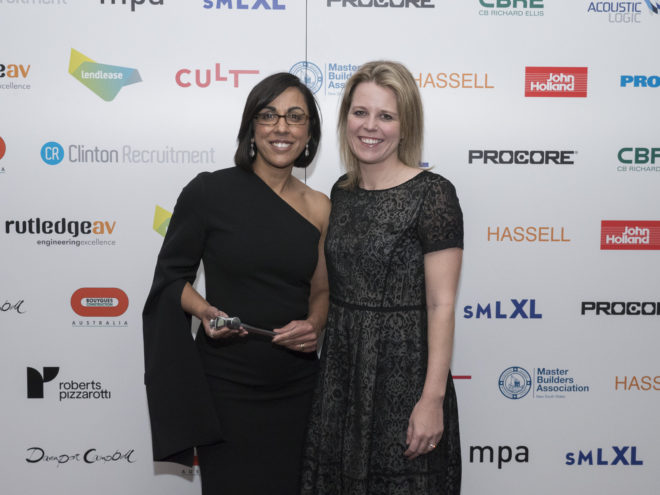 Other category and merit winners include:

Roberts Pizzarotti for Contribution to a Project’s Development

MPA Award for Achievement in Construction, Refurbishment and Fit Out

The Sydney Street Choir, which aims to inspire and empower those who have experienced hardship or disadvantage, performed during the ceremony. Lee Lin Chin was the evening’s Master of Ceremonies.

Richard Munao, founder and managing director of Cult, donated a designer sofa from Danish brand, Republic of Fritz Hansen, which was auctioned off during the night. The proceeds of the auction will support the International Women’s Day Scholarship in 2018.