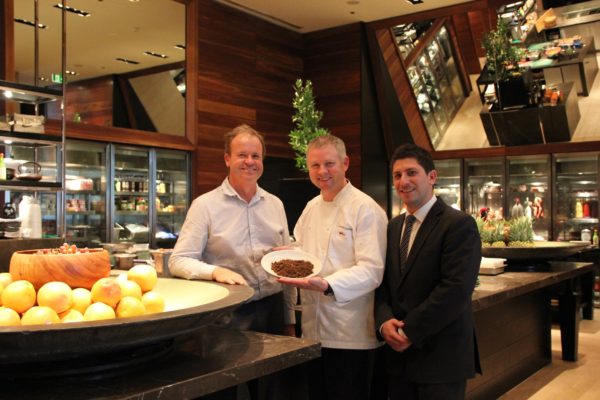 Grand Hyatt Melbourne has been announced as a finalist in the Large Business category in the 2017 Victorian Premier’s Sustainability Awards for reducing food waste onsite through a Closed Loop Organics Unit.

The Grand Hyatt is the first five-star hotel in Victoria to install a Closed Loop Organics Unit. This innovative technology processes food waste onsite, using naturally occurring microbes, heat, oxygen and agitation to reduce food waste by up to 90 percent in 24 hours. In 2016 during its eight months of operating, over 39,000 kilograms of food waste was processed on site, producing almost 14,000 kilograms of compost. The unit will annually avoid 49.72 tonnes of carbon net emissions.

As an industry leader, Grand Hyatt conducts site tours and information sessions for staff and members of the hospitality industry to raise awareness of food waste recycling.

The interim chief executive of Sustainability Victoria, Stephanie Ziersch, praised the Grand Hyatt team for its creative and insightful work towards building a more sustainable environment.

“Delivering these awards each year means we continue to discover the talent and enthusiasm Victorians have for protecting their environment and thinking creatively about new models of sustainability,” she says.

“These awards represent Victoria’s highest recognition for sustainability and acknowledge leadership, innovation and achievement. Each finalist should be congratulated for improving sustainable outcomes across business, government and within the community.”

Now in its 15th year, the Premier’s Sustainability Awards continue to promote leadership and innovation in sustainability, and encourage all Victorians to step up.

The winners will be announced at the awards ceremony, hosted by media personality Charlie Pickering on Thursday 26 October at the Plaza Ballroom, in Melbourne.

For more information on the Awards, finalists and to purchase tickets for the award ceremony, visit www.sustainabilityawards.vic.gov.au