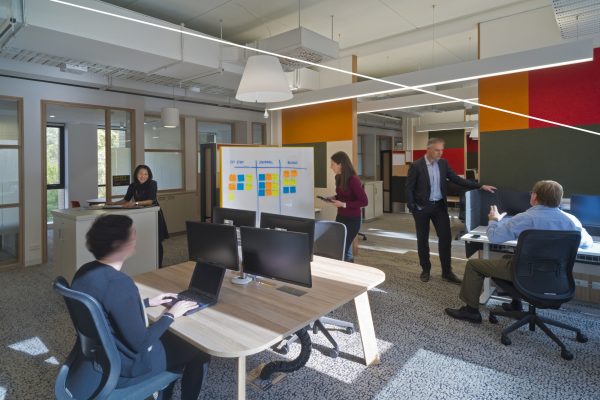 Companies are increasingly developing workplaces that offer agility. GRAHAM KIRKWOOD looks at how the physical environment can keep pace.

The traditional workplace model strives for efficiency and reliability, but the emerging focus among more progressive and volatile organisations is agility, innovation and connection.

While this shift is transforming team structures and work methodologies, the physical workplace, based on open plan and activity-based working (ABW), remains largely efficiency-based. This problem is compounded as workplace performance continues to be measured against individual performance rather than that of teams.

We need a new workplace model that puts the team above all else. Here, we share a case study developed by Resource Architecture with Latrobe University Research to develop and pilot such a model, identifying the key learnings for facilities managers.

FROM EFFICIENCY TO TEAM-BASED WORKING

The 20th century defined the organisation and much of our thinking on management. Management distilled every role and function into the most efficient process, then overlaid ‘culture’ that would recognise and reward individual achievement. The structure was a command and control hierarchy where ‘managers’ were accountable for individual performance.

Within a stable business environment, this workplace model served us very well. Some of the most successful organisations developed economies of scale, and quality processes that created natural entry barriers for the smaller start-up.

But organisations today are working within a much more volatile environment and no MBA course will equip the manager to anticipate and manage the disruption and the pace of change.

There is a move towards agility, connection and innovation and, to do this, large organisations are breaking down their structures into small self-organised teams bound by trust and shared purpose to deliver outcomes, cutting out middle management but retaining structures of governance.

While the information technology sector is perhaps leading the charge, these changes are also being introduced into large banks and government agencies. Large organisations are thinking more like communities of small- to medium-sized businesses or enterprises (SMEs), and SMEs are finding themselves able to compete successfully with the large players.

Within large corporations such transition requires leadership and strong communication. In May 2017 the ANZ Bank announced it had adopted a team-based workplace strategy across its executive teams. CEO Shayne Elliott broke up the organisation into teams of 10, called squads, and groups of squads called tribes.

Elliott was quoted in The Australian Financial Review, saying: “This is about ownership: self-directed teams taking ownership and pride in what they are doing. This is about short time-frame delivery; it is not about delivery of things with a two- or three-year horizon. It is about getting things to market in about six to 10 weeks.”

Although these structural changes are well-established, how we design our physical workplace has lagged behind. Traditional workplace design models such as Open Plan and ABW largely remain within the efficiency-based paradigm and do not support teams.

THE PROBLEM WITH TRADITIONAL EFFICIENCY-BASED WORKPLACES

Common problems seen in various traditional workplaces are well-documented, but rarely resolved. Problems have been further exacerbated by the emergence of ABW and hot-desking. By only focusing on individual activity and efficiency, the industry continues to overlook how the workplace can support teams and how teams can overcome many of the problems of open plan and ABW.

The pilot workplace constructed by Resource Architecture with La Trobe University Research supports teams and overcomes many of the problems of the traditional efficiency-based workplace. John Dewar, vice chancellor at La Trobe University explains: “The primary purpose of this exemplar project is to demonstrate what’s possible… how we have to be able to experiment, innovate, learn and adapt. This is how we do our research: we take people from across disciplines to focus on a problem and they work together. That’s the core of our research strategy. The same goes for our operating model; with the matrix model people have to work together on different parts of the university to solve problems. If we don’t, we just end up in silos and people get battered around. It actually speaks to what we are trying to do.” 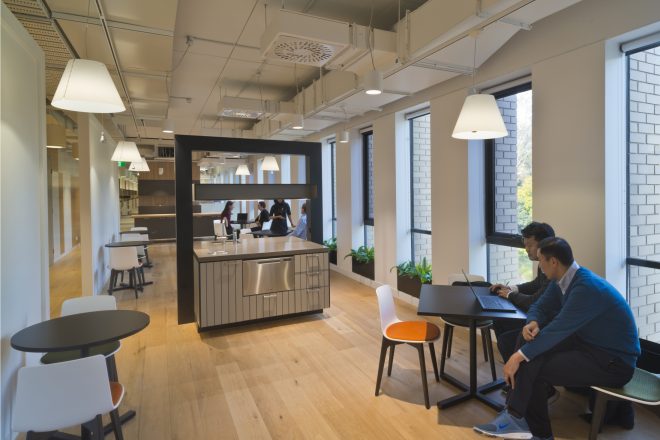 The new workplace model is founded upon six principles of what makes teams work most effectively. Workplace design evolves from these principles and supports them both physically and virtually. Described below are the six principles and how the pilot addressed each one.

Research in the Business Horizons journal shows that an ideal work team is between four and eight people and never more than 12. Four to eight is the number where each member can build a close working relationship and appreciate the diverse individual character strengths. It is also the accepted span of control for any team leader.

Within the La Trobe University Exemplar Workplace, rather than adopt open plan, workspaces are half enclosed ‘team domains’, accommodating between four and eight people. Although the domains are not strictly allocated to any team, team artefacts such as task boards, display panels, lockers and storage are clustered, meaning that the team intuitively gravitates to and settles within the closest domain. To overcome the risk of teams being siloed and disconnected from other teams, the domains are visually connected to other teams and to the shared spaces used for collaboration or quiet work.

2. Sharing of resources and information

Access to and reciprocity of information and resources is a central cornerstone in building trust and shared purpose. Examples include open systems that build upon digital document management systems and customer relationship management and the ability to embed collaborators and customers for short periods.

Within the La Trobe University Exemplar Workplace desks are not allocated and people are encouraged to work among other team domains depending on the need to collaborate or find a space suited to the task in hand. As the ratio of people to desks is one to one, and given that the peak occupancy is 75 percent, there are always free desks available. This encourages external collaborators to share the space for special projects.

At the heart of the space is the ‘Welcome Piazza’, which doubles as a reception and meeting place. The space is at the central circulation intersection, and people intuitively cross paths and have informal two-minute conversations.

3. Mobility and distribution of work

With new technology, people are less tethered to their desks and are able to maintain daily communications with their team, no matter where they are. Greater mobility and distribution of work enables team members to work alongside other collaborators, teams or customers.

Enabling the team to solve problems at the source, rather than seeking executive authority, improves the quality and speed of decision-making. For this to be effective, each member must have a clear understanding of purpose in the context of the whole organisation. It also requires a higher level of connection with the customer.

La Trobe’s Dewar explains: “We have a complicated operating model and it’s one that requires two things. It requires very clear accountability, so people know exactly what their job is, but it also requires that if our people see a problem that isn’t their job to fix then they know where to go, whose job it is to fix it. So it requires deep accountability, but great horizontal flexibility.”

In the pilot workplace, each team is equipped with a ‘task board’, which is the centrepiece of agile methodologies and team accountability. There is also a dedicated space called a Swarm, which provides a place for team leaders and external collaborators to gather, share information and solve problems collaboratively.

The more volatile the industry, the faster that ideas and information flow, the better. But, unless it is structured and disciplined, collaboration can be a millstone. Agile methodologies play a part in capturing and disseminating information more rapidly.

Within the La Trobe Exemplar Workplace, a central scrum (huddle) space is provided, equipped for frequent, disciplined and fast collaboration. Each team is encouraged to conduct daily 15-minute stand up meetings with the entire team, using web conferencing tools to connect those who are located elsewhere.

Face-to-face contact is what helps build trust and shared purpose. Social media, collaboration apps and emails avoid face- to-face contact. With web conferencing, and greater mobility, people no longer have a reason not to engage with others face- to-face. The La Trobe University Exemplar Workplace provides a variety of shared collaboration spaces away from the team domains. It also provides web-based conferencing tools that enable people to connect anywhere and anytime.

While the survey outcomes demonstrated that user satisfaction improved overall by 25 percent, it is also worth pointing out that the old workplace as a baseline set the bar very low. Efficiency also improved, achieving 10 square metres per work point and average utilisation of 59 percent. Actual team-based performance outcomes are yet to be measured.

To effectively measure the performance of teams, a new set of performance measures is required that measure actual outcomes for each of the six team-based working principles described here. Further follow-ups are planned.

The Exemplar Workplace is possibly the first of its type in the world, and is believed to be the first to have non-allocated desks within the university sector. The transition from each person having their own desk to having a team space with unallocated desks was difficult for some. It may take a little more time for people working within the workplace to fully come to grips with some of the team-based principles and the opportunities it provides.

Now that the space has been occupied for eight months, the project sponsor MaryAnne Aitken, director Research Services, says: “I am encouraged by the findings of the (post occupancy) report, but also think that things are even better now than they were reported in September/October (three months following the move). The space is becoming more ‘normal’ and less of an alien work style to most of us. Why, even I have settled in now!”

Graham Kirkwood is director of Resource Architecture in Melbourne www.res.com.au.