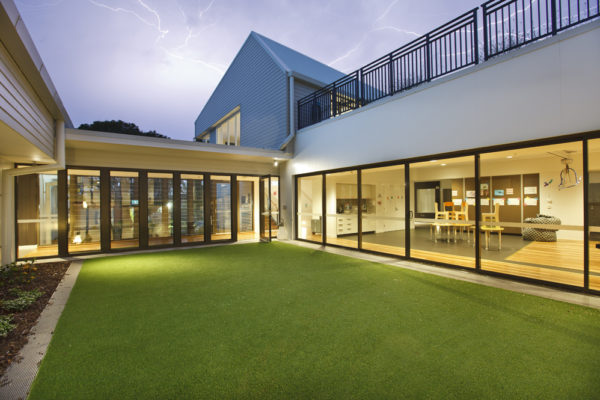 Turner & Townsend’s project manager, Scott Sheehan, has been awarded a prestigious accolade – Construction Professional of the Year at the Royal Institution of Chartered Surveyors (RICS) – for the work he undertook at Hummingbird House. The RICS Australian awards night was held on 1 June 2017 at Melbourne’s RACV Club with hundreds of people taking part in the celebrations.

Hummingbird House, Queensland’s only children’s hospice, is an eight bed facility providing best practice care for children with life-limiting conditions and their families. It is a joint initiative of Hummingbird House Foundation and Wesley Mission Queensland.

Project managers for Hummingbird House, Turner & Townsend (led by Scott Sheehan), completed over 900 hours of pro-bono time over a two year period for this project.

Sheehan comments, “I’m elated to win this award. Many people and organisations have donated their time to this children’s hospice, which is changing the lives of many children and their families. It was a pleasure to work for the Turner & Townsend team on a project that has set a benchmark for what hospices for children should look like.”

Anooj Oodit, managing director, Australia and New Zealand for Turner & Townsend says, “The team, including Scott, has delivered an important facility in Hummingbird House. They have worked tirelessly to deliver it on time and within budget. It is a legacy project for the community which we were very proud to contribute to.”

“The whole community has been the beneficiary of the leadership and professionalism brought to the project by Scott and the team from Turner & Townsend,” says Paul Quilliam, managing director and cofounder of Hummingbird House Foundation. “Their in-kind involvement and support from the outset has been second-to-none and has been a crucial factor in attracting other high calibre construction partners and consultants to come on board.”

General manager of Hummingbird House Dr Fiona Hawthorne says,“It is such a privilege to work in a state-of-the-art facility such as Hummingbird House. This could not have been achieved without the generosity, professionalism and advocacy demonstrated by Scott and the team from Turner & Townsend. One of the things that struck me the most was how warmly everyone in Scott’s team embraced the build and the facility they were helping to create. Nothing was too much trouble. I will always be grateful to Scott and Turner & Townsend for their work on Hummingbird House.”

Hummingbird House will deliver a wide range of services including: short-break stay, symptom management, emotional and psychosocial support, care at the end of life, bereavement support and many activities and therapies.