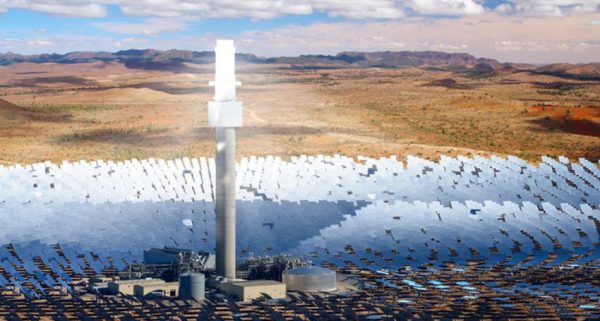 Global solar thermal company SolarReserve is working on a deal with Heliostat SA to build more than 12,800 tracking mirrors for its 150-megawatt Aurora project in South Australia.

The agreement will utilise skills and technology initially developed in South Australia for the automotive industry.

SolarReserve has announced a Memorandum of Understanding with Heliostat SA for the development of plans and processes for the supply, fabrication and assembly of its SR96 heliostat assemblies.

The two companies are working together to complete the final agreement.

Heliostats are the large tracking mirrors in a solar thermal power station, which follow the sun throughout the day and precisely reflect and concentrate sunlight onto a receiver.

Each SR96 heliostat mirror will include 96 square metres of glass plus steel supports and electric drives resulting in a field of mirrors with more than a million square metres of surface area.

The heliostats at the Aurora project will reflect and concentrate sunlight onto a central receiver on top of a tower. The process heats molten salt, pumped to the top of the tower and flowing through the receiver, to 565 degrees Celsius.

The molten salt provides a stored heat source that is used to generate steam to drive a single turbine that generates electricity. The facility will be capable of generating power at full load for up to eight hours after sunset.

Heliostat SA is a South Australian company and part of the Fusion Renewables Group comprising Fusion Capital, the University of South Australia and Precision Components, a former tier one supplier to Ford, Toyota and GM Holden.

Following the decision to cease auto manufacturing in Australia, Heliostat SA was borne out of Precision’s strategic plan to transition from a component hot stamping and metal pressing business to an advanced manufacturing and engineering business with a focus on high value-add, specialised products in emerging markets.

It has already manufactured heliostats commercially, including 150 for a solar project in Japan in 2016.

“The team at Heliostat SA are really looking forward to adapting the low-cost manufacturing techniques learned from more than 20 years of automotive knowhow into the manufacture and assembly of the SR96,” he says.

The Aurora Solar Energy Project located in Port Augusta, about 300 kilometres north of  Adelaide, will incorporate eight hours of storage or 1100 megawatts-hours, allowing it to operate like a conventional coal or gas power station.

The MOU is the most significant advancement in the project since it was granted development approval and opened its Australian headquarters in January.

SolarReserve’s chief executive officer Kevin Smith says the company was looking forward to teaming up with Heliostat SA to bring manufacture of its world-class heliostats to South Australia.

“SolarReserve is committed to supporting South Australia’s goals which will attract investment, create South Australian jobs and build an exciting and growing new industry,” he says.

The Aurora project is being developed with the option to add solar photovoltaic (PV) technology in order to maximise electricity generation from the CSP facility during peak demand periods, as well as meet the station’s own electricity needs.

The addition of PV could broaden the scope of Heliostat SA’s manufacturing supply to include PV racking systems.

The partnership is likely to stretch beyond the Aurora project with SolarReserve hoping to build six solar thermal projects in South Australia over the next decade.

“The Aurora project along with SolarReserve’s future investment in the state will develop a supply chain and local manufacturing expertise that can be leveraged across the broader region, create thousands of jobs for South Australians, and bring about a new age in clean, reliable and affordable energy,” says Tom Georgis, SolarReserve’s senior vice president of Development.

Precision components last year partnered with the University of South Australia to open a concentrated solar research field on the outskirts of Adelaide (below).

The field is being used to develop new technologies such as a Wi-Fi controlled system to manage heliostats remotely and lightweight, durable heliostats made from plastic.

It is not the first time the University of South Australia has partnered with industry to commercialise its world-leading thin film coating technology.

The group of researchers partnered with SMR Technologies, a car mirror manufacturer in Adelaide’s southern suburbs, to commercialise the world’s first fully plastic auto mirror in 2012. About four million of the light, shatterproof mirrors have since been exported around the globe.

South Australia has become a world leader in renewable energy projects in recent years and is home to Elon Musk’s ‘world’s biggest battery’, which began operating at a wind farm in the state’s mid-north late last year.

The state also leads the nation in the uptake of wind energy and rooftop solar with renewable sources accounting for more than 40 percent of the electricity generated.

Lead image: an artist’s impression of the Aurora plant to be built by SolarReserve in South Australia.