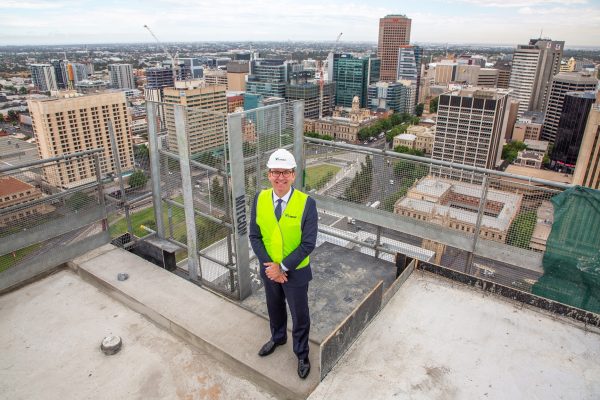 The Kodo apartment development in Adelaide will not only become the tallest residential building in the city upon completion early next year, it will become the first in the state to be serviced full-time, on-site by a combined building and strata management service.

An emergency maintenance line, which will be accessible 24 hours a day, 365 days a year, will also be established for Kodo residents, who will be backed by Strata Data’s extensive team of qualified tradespeople.

Traditionally, building management is provided separately to strata management, which can increase costs and red tape for residents.

“We want to ensure that Kodo owners and residents receive the highest possible service, so in a first for Adelaide apartments, we’ve partnered with Strata Data to provide an around-the-clock service that combines both strata and building management services under the one roof,” says Mark Jarman, CEO of Flagship Property Holdings.

“Kodo is the first apartment building in Adelaide to bring together strata and building management services under the one provider, which will lead to greater efficiency and ensure everything remains in perfect shape for the enjoyment of residents.”

Strata Data senior body corporate manager Daniel James says the company, which now has 70 staff and more than 15,000 clients in Australia, is delighted to be appointed to the $100 million Kodo development.

“Kodo is set to become an iconic building on the Adelaide skyline so we’re thrilled to be appointed to provide both strata and building management services on-site on a full-time basis – a first for a strata management company in Adelaide,” says James, adding that Strata Data earlier this month won the Strata Community Association’s SA Strata Manager of the Year Award for the third consecutive year.

“This appointment continues a surge in new apartment and community titled land division appointments for Strata Data in South Australia, with the 2018/19 financial year on track to eclipse our 2017/18 performance, which was one of our best on record. In fact, we are forecasting growth of approximately 1300 lots to our portfolio over the next two years.

“Our team looks forward to welcoming new residents of Kodo early next year and assisting them move into their new homes. We also look forward to remaining on standby for any maintenance issues that may arise to ensure the building always remains in impeccable order,” James says.

Construction of the 30-storey Kodo building, which rises 103 metres tall, officially topped out earlier this month following the completion of the final concrete floor pour by builder Watpac.

Kodo is on track to welcome its first residents by Easter next year.