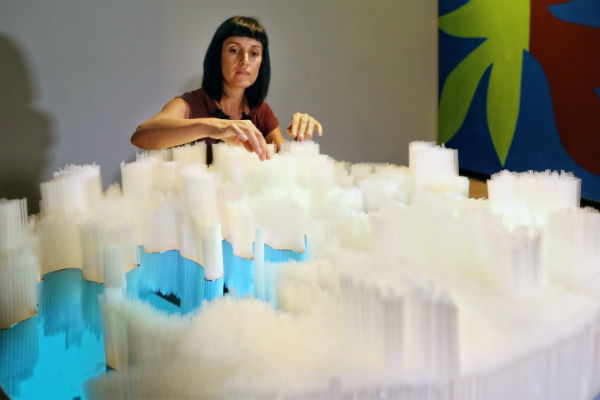 The Sydney Opera House recently announced experimental visual artist Francesca Pasquali will transform 15,000 unused plastic straws from its on-site restaurants and bars into an art piece, which realised live on 2 September at Antidote 2018 – a weekend of ideas, action and change.

On 1 August 2018 all six of the Opera House’s restaurants became plastic straw free, a move that will save more than 2.2 million straws annually. To ensure 15,000 remaining plastic straws did not become waste, the Opera House engaged Pasquali to create a visually arresting and thought-provoking artwork, in collaboration with sponsor Adobe.

Sydney Opera’s House head of Talks and Ideas, Edwina Throsby, says, “Antidote is all about creative ideas which can improve our collective future. Francesca Pasquali’s ethos and practice, with its focus on using common, disposable materials to create beautiful and enduring works of art, brilliantly reflects our generation’s environmental concerns. I’m so pleased to be welcoming her to the festival.”

Sydney Opera House environmental sustainability manager Emma Bombonato says, “Movements like the City of Sydney’s #SydneyDoesntSuck and #TheLastStraw are gaining momentum worldwide with support from small venues and multinational corporations to entire cities and countries. As the symbol of modern Australia, the Opera House has great potential to lead by example and champion grassroots action.

“Removing plastic straws and changing the expectations of our millions of annual visitors is one piece of a bigger story. We’re on track to reach ambitious targets from our Environmental Sustainability Plan to achieve a 5 Star Green Star Performance Rating, 85 percent recycling of operational waste and carbon neutrality by our 50th anniversary in 2023.”

Antidote attendees and the general public observed Pasquali create her artwork live from 10am to 4pm in the Drama Theatre Foyer on Sunday 2 September. Now completed, the work will be on display for the general public in The Lounge, enabled by Samsung, from 17 September to 10 October 2018.