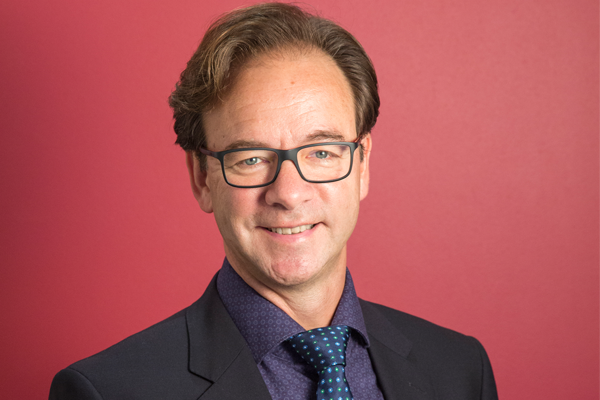 As head of workplace at KPMG, PETER DOLLIN has learned that to influence the C-suite, you need to be speaking their language.

Spearheading the rollout of new major buildings in Sydney and Melbourne for global professional services giant KPMG, Peter Dollin is more than aware that people come into the workplace and facilities field from all manner of backgrounds. His just happened to be plastering.

“My background is in construction. I had to leave school in year 10 and the next door neighbour had a plastering business,” he recalls. “I went and knocked on his door and asked for a job. I did solid plastering, cement rendering and ornate plasterwork in old terrace houses. It gave me a passion for buildings, especially when you start with nothing, watch it come to life and see the affinity people have with the built environment.”

Dollin had hoped to study economics, but he fell in love with his trade. “I became the leading apprentice in New South Wales in each year of my trade course because I was just so passionate about it. I even got my builder’s licence because I loved construction.”

But as time went by, Dollin started to think about the process and, with it, a new career direction. “I’d see a lot of mistakes; one day I’d cement render a wall and the next day an electrician would come along to gouge holes out of it. It occurred to me there was something very wrong with this approach, especially at the management level.

“After I finished my trade I did a Clerk of Works and Building Foreman Certificate, so that I could look at the management of buildings. Then, out of the blue, I got an offer from Westpac.”

Dollin says he knew nothing of large corporations or property portfolios and signed up to do a few fitout projects, which he assumed would have a projected run time of three months or so. “But I just kept moving on to the next thing – three months became six and there was still so much work to do. I ended up staying 15 years.

“It opened my eyes to how much effort goes into creating, maintaining, curating and evolving a workplace. It was the 1980s and a boom time – we couldn’t get through the fitouts fast enough for the growth.”

When the stock market crashed in 1987, followed by a deep property-led recession in the early 90s, Dollin says commercial real estate was hit very hard. “I had to go back to places we’d built or leased and close them down. It was a very tough and depressing thing to work through. It brought it home how much companies needed facility management on both the ups and downs – the growth phase and the correction phase as well.”

Suddenly Dollin found himself to be a project manager without any projects. “But we had a wealth of properties in the portfolio and someone had to manage them. That was my entry into FM rather than necessarily projects.

“And my grass roots construction knowledge came in very handy. I had a practical understanding of how things fit together and who you need to consult with and when. I found the stakeholder management very interesting.

“At this point, Westpac had 600 people in property across the country. We had to undergo a painful exercise of shedding a lot of staff to create a small national team and much smaller state teams. It wasn’t just about my skills or training or background, it came down to how we could get on with people and having emotional intelligence and empathy was really key to that process.”

Dollin was faced with an uncertain future. “Departments were closing, friends were leaving. I thought about what I needed to do to get myself through that period and that was to focus on being the best at what I could do and build strong relationships.”

From the 90s onwards, FM became Dollin’s passion, but he wasn’t content to drive value just within his remit in New South Wales. “I was Sydney-based, so that’s all I looked after. I quickly realised there was an opportunity in taking a national perspective, but also saw the complexity. I saw a model where Western Australia and Queensland were similar operationally because of the geographic spread and comparable number of branches, but they had 10 people in Queensland and 20 in WA doing pretty much the same output. I couldn’t understand why that was the case and no one else could either, so I needed to look for the right model.”

Dollin says he was sitting on massive amounts of data but had no benchmarks. “To be able to determine the best way forward and to make a case for it to the leadership team, we had to make sense of the data and that took a while. After a difficult search for external cues, our CFO (chief financial officer) suggested that, surely with our size of portfolio, we had all the benchmarking data that we needed – and he was right. It was a long process, taking some three to five years to get it humming on an organisational, operational and external procurement level. It’s so important for firms to have switched-on FM specialists to be able to see what’s really happening and provide value to senior management and the C-suite. It’s not just about fixing blocked toilets. That dawned on me when I joined JP Morgan Chase in 2003.”

As a consultant head of facilities management, Dollin was exposed to JP Morgan’s FM partner, CoreNet Global. “I remember lots of discussions with peers and other people saying the FM team was very important, but could be more effective and have a better impact on the bottom line. The issue for us working in the team was: how do we get the messages across to the decision-makers to effect those changes? I decided to do a Master of Corporate Real Estate course as the next phase in my learning and it exposed me to the differences between how Australia does things compared to across the world.

“One of the seminars I did was the impact of corporate real estate transactions on the balance sheet. It sat me back and I had to ask myself what that meant. My whole life was about understanding square metres, head count, insourcing and outsourcing, but I had no idea up until then of how the C-suite thinks and how to talk their language.

“We were asked: ‘If you bumped into your CFO in the lift, what would you ask him about the company?’ We scratched our heads and suggested a chat about the FM portfolio.

“The response was blunt. None of us spoke the CFO’s language. The way to get his attention was to ask his view on whether the company was cash flow driven or capital-driven. From that point I really understood what our impact could be – not so much in terms of the tangible things we do, but how it influences the financial context. It made me look back on some of the decisions we made at Westpac – the timing, the tax impacts. Timing can make a meaningful difference on the value of a property asset transaction to the business holistically and, to some extent, with almost ambivalence regarding the value of the transaction itself. This can be a difficult concept for FM practitioners to understand, let alone accept where top dollar is considered the only benchmark.”

Learning the language of the C-suite is something Dollin now tries to teach his FM and wider team members. “If you have a specialised area and speak that language all the time, you get categorised to that. If you become ‘bilingual’ and make sense to the senior team, you’re seen as an important asset – they immediately realise that you get what they need.”

But at JP Morgan Dollin was still regarded as a contractor and there were certain commercially-sensitive conversations that understandably he wasn’t privy to. “If I’d been on staff there from the outset I may not have made the leap to UBS or KPMG. JP Morgan did make an offer for me to join them on staff, but I had already been approached by the chief operating officer at UBS who was looking for someone to manage its portfolio, so I thought this was my opportunity to be ‘on the inside’ to make more of an impact.
“Again, when I sat down with the COO (chief operating officer) for a coffee, I was fluent in his language. After a couple of hours he told me he wanted me on board. It was a great experience – I was exposed to all the internal discussions on strategy and sat on various global forums around their FM information systems, future of workplace program and global ecology program during my nine enjoyable years there.

“Then I got another tap on the shoulder, from KPMG. I didn’t want to leave UBS – it was like a family. But again, when I got in front of the KPMG people I just got more and more interested in their national workplace of the future program. What intrigued me about KPMG was their courageous decision to move from traditional partner offices to agile workplaces, which was truly transformational.

“But I kept saying ‘no’ and they kept asking me back. Not so much that I didn’t want to join KPMG, but leaving UBS was very difficult thing to contemplate given the friendships I had and loyalty I felt to the company. They asked me to speak to their CEO, Gary Wingrove and that sealed the deal. He told me they wanted to change the culture of the firm and use workplace as the catalyst. How many times do you hear that from a CEO?”

Dollin recognised that KPMG was a large organisation where not everyone thought the same way. “I’ve been involved in programs where change has been rolled out and hasn’t really stuck because the C-suite’s heart wasn’t in it, but Gary was the sponsor of this project and it helped that the national executive and CEO were right behind the principles of change.”

Time-frames were very tight. “The leases had already been executed and construction had started at bothBarangaroo and Collins Square (KPMG’s Sydney and Melbourne flagship offices). But KPMG had already created a pilot floor in their existing buildings, set up like a model of agile working and was rotating groups through there 10 weeks at a time. It really gave people the tools to learn how to work in that environment.”

Coming on board at the end of 2014, Dollin had to deliver Barangaroo in mid-2016 and Collins Square at the end of that year. His focus is now completing the rollout across Australia, having also done projects in Parramatta and Adelaide, while Brisbane, Perth and Canberra are still in train.

“We learn what’s working and what isn’t and factoring that into new locations, even revisiting delivered workplaces to evolve them in subtle ways. The world’s changing so fast and change is a constant, so we have developed a workplace communities role, which is derived from our workplace change team so that we make sure we don’t lose the value from what we’ve done and we keep evolving. That’s particularly true from the FM perspective – looking at what we do and ensuring we have the right competencies, so that we can manage these first- class workplaces – with the best mix of positions internally and partners externally in order to optimise the significant investment that KPMG has made.”