The unbearable being of light 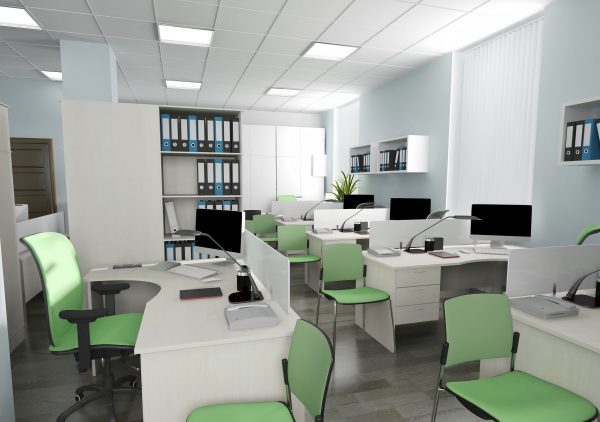 The word is finally getting out about the importance of ergonomics in the workplace, as more and more people gain awareness of the discipline’s many benefits. Today people are quicker to relate their back pain to an awkwardly designed task chair or their repetitive strain injury to problems with their computer keyboard/mouse set-up. But how often do those same people go home with CVS and not know what’s caused it? CVS? Computer vision syndrome, for the uninitiated. Ninety percent of office workers will experience it at some point – essentially dry or strained eyes, or neck pain. It can manifest as headaches or even small red dots around the eye. Sufferers may be familiar with such symptoms, but unaware what has driven them.

This is because light is intangible and ethereal. It’s hard for us to understand that something that can’t be touched can have such physical impacts. When it comes to office or workplace lighting there are also a number of myths that need to be counteracted. The first is the most basic: that light is not an ergonomic issue, when it clearly is. It can have a significant impact on the comfort of the worker and, therefore, their productivity.

The second myth is that we all need the same amount of light, while the third concerns the desire for natural light, and these are two areas that have evolved over time.

In the 1960s and 70s workplaces demanded very high levels of light at desks – 1000 to 1500 lux – as most tasks were driven by paper. The introduction of desk computers in the 1980s changed everything. With tasks centring on computer screens, basic lux levels for overhead light came down by a massive 70 percent, but there was still a marked increase in complaints of eye discomfort.

Now in the 2000s the workplace has evolved again, to an activity-based working or agile model, meaning many workers perform a wider variety of tasks. We may be working on computers predominantly, but we’re also conducting face-to-face meetings, using the phone and working from different places in the office.

But our static lighting hasn’t evolved to match these changes. Our electrical engineers are still generally specifying static lighting for the workplace that doesn’t really accommodate the user, which is very poor from an ergonomics perspective.

Another major issue is that as we get older our eyes deteriorate, our lenses cloud up and become less pliable. The latter condition means we lose our ability to focus over a wide range of distances. Unfortunately, many of the decisions about light in the workplace are being made by younger people, who have very different requirements in this space. People in their 60s need as much as 3.5 times as much light as someone in their 20s to perform a simple task like reading a paper-based document.

There is a very simple way to mitigate CVS, ageing eyes and the associated challenges of badly designed static lighting: dual source lighting. This means combining an overhead static lighting design with individual task lights, and adjustable task lights at that.

Recommended by the best lighting designers, dual source lighting schemes create environments that are much better suited to a variety of tasks – instead of simply flooding the environment with a whitewash of light. Using a task light in conjunction with a lower overhead wash means the user is able to adjust the light to suit the task in hand. The Australian standard is around 500 lux for the work surface, but with dual source lighting, this can be reduced by half to 250 lux. But adjustable task lighting enables you to have a much brighter light, simply by moving the appliance closer to your desk. If a task requires detailed documentation – working with drawings or specifications, for example – light levels can be increased again from 500 to 1000 lux. Equally important is that the task light must be simple to use and adjust, as a product will be underutilised if isn’t easy to use.

Other than physical benefits, dual lighting schemes – particularly those using LEDs in their overhead, task and feature lights – have positive financial and sustainability impacts, as the energy consumption of an LED bulb is so much lower than that of a fluorescent or incandescent light. Fifty percent of energy consumption in most commercial buildings comes from lighting, so if the ambient light from overhead lighting is reduced, coupled with the use of a high energy-efficient localised task light, this will have a significant effect on the cost of energy for an office space. Plus there will be a huge environmental benefit. A less obvious financial impact is the increased productivity that ensues when workers are more comfortable in their space and have the right work tools to perform the multiple tasks required of them. It’s harder to calculate, but the ‘greater comfort = greater productivity’ equation is widely accepted worldwide.

One last myth that needs addressing is the desire for natural light at all costs. Natural light in a workplace is, of course, a good thing, but it should always be considered that natural light comes with a lot of glare. It’s important to carefully note how a worker is using their space, and designing and setting up that space so that they can perform their tasks effectively and comfortably. A worker situated on the perimeter of a building, with natural light glaring through a window, compounded by glare from overhead lights, the computer screen and feature lighting, could find themselves with a severe case of CVS. But a good lighting design, preferably dual source, may well prevent the problem from ever arising.

Tim Goodred is the state manager WA and SA for Humanscale.

This article also appears in the October/November issue of Facility Management magazine.