Virtual reality bridges gap between hazardous workplaces and the classroom

Virtual reality bridges gap between hazardous workplaces and the classroom 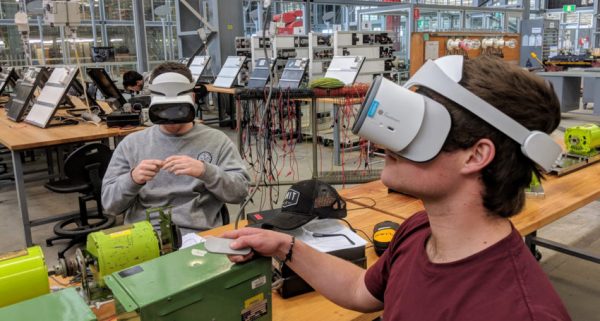 Virtual reality technology is being used to teach refrigeration students in South Australia how to identify workplace hazards in real-world settings from the safety of the classroom.

TAFE SA has teamed up with Adelaide-based startup Lateral Vision – also located within the Tonsley Innovation District – to create the virtual tours and environments that students will use as part of their training.

The VR pilot program includes three refrigerant safety courses, including a Next Generation CO2 Refrigeration Plant running in a new supermarket, an Ammonia plant running at an ice factory and flammable refrigerants.

Lecturer Shannon Baldock says the VR content would allow students to respond as if they were on a live job site.

“The refrigeration industry is going through a bit of a shift in terms of using new refrigerants/gases that are more environmentally friendly, so these headsets will give students the opportunity to learn about them and identify safety risks and hazards in the safety of a classroom learning environment,” Baldock says.

“Students will be able to have access to plant equipment and areas that we currently cannot take them due to restrictions around safety and ease of access.”

Lateral vision director Alex Tolson has been working closely with Baldock to find and develop innovative solutions to the limitations and complexities of training students to work safely with these materials.

“Virtual reality will allow students to gain an extra level of experience by visiting and engaging with sites which would otherwise be off-limits to most trainees,” Tolson says.

“We use a special 360-degree camera that records stereoscopic imagery – when students view the content in a VR headset they are able to see things as if they were there.

“Using stereoscopic imagery gives the viewer depth to what they are looking at, giving them a better representation of the size of the machinery and equipment.”

Lenovo managing director Matt Codrington sysd Mirage Solo was the first of its kind – an all-in-one with Google Daydream and World Sense.

“Seeing VR deliver outcomes in learning is exciting and being able to put people in a virtual environment to provide better perspective and access to instances that would normally be out of reach is just one of the areas where we feel has real benefits,” he says.

Baldock says the use of VR on a class scale was “very new to training” and believed it was the first time it had been used for air-conditioning and refrigeration.

If successful, he says TAFE SA will aim to have a headset for each class by the end of the year.

“I envisage the pilot being rolled out to other trade courses at TAFE SA as staff become more familiar with the technology.

“In the long term we would expect that the use of VR in the classroom will be as common place as the use of laptops.”

The Tonsley site was a Mitsubishi car assembly plant until a decade ago and has since been transformed into Australia’s first innovation district specifically designed to enable businesses, industries and companies to collaborate with researchers and tertiary students.

Story and image courtesy of The Lead.