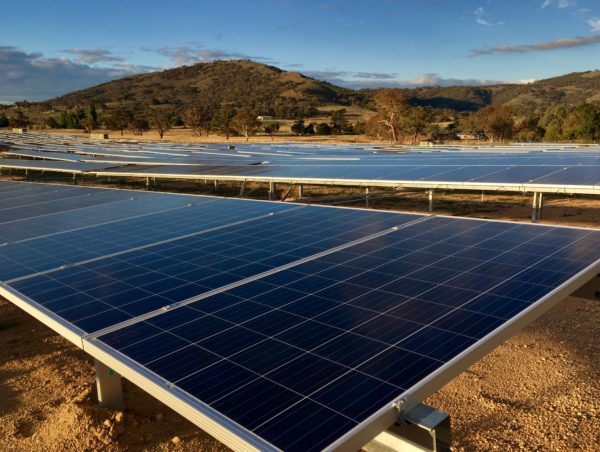 The Williamsdale Solar Farm is expected to power the equivalent of approximately 3000 ACT homes. It will help the territory reach its target of sourcing 100 percent renewable electricity by 2020, and is a key asset in IIG’s Solar Income Fund. IIG’s Solar Income Fund aims to provide investors a target return forecast of 10 percent per annum.

Minister Rattenbury says, “The clean power generated by Williamsdale Solar Farm takes us another significant step towards achieving our target of 100 percent renewable electricity by 2020 in the ACT.

“Williamsdale Solar Farm is now the fourth large-scale solar farm built in the ACT. As with the other projects, the Williamsdale Solar Farm also brings many other economic and research benefits to the region. The solar farm’s developer, IIG, has offered student tours for a number of the ACT’s tertiary institutions, which will help to inspire the engineers and energy start-ups of tomorrow.”

IIG’s head of Renewable Energy Infrastructure, Lane Crockett, remarks, “The Williamsdale Solar Farm is a part of Australia’s transition to a clean energy economy. The smartest investors and developers in the country aren’t trying to eke another few years out of old unreliable, polluting coal-fired infrastructure. They are building the clean generators that will deliver reliable electricity, crucial environmental benefits, health benefits and attractive financial returns. Meanwhile, our investors have confidence knowing that the ACT government has committed to buying the farm’s electricity for 20 years.”

IIG’s Solar Income Fund was launched in August 2016 with the capital raised in less than a week.

“The 20-year power purchase agreement will provide a reliable, long-term income stream for the Future Super portfolio and other investors in the IIG Solar Income Fund. Our investment demonstrates the important role superannuation can play in upgrading Australia’s grid to 100 percent renewable energy,” Sheihk says.

IIG has also developed a pipeline of new solar farms in preparation for launching a second solar energy investment fund later in the financial year.

BY ON 30 October 2017
This article also appears in Corporate Waste Solutions.