A most precious commodity: winner of Water Research Prize revealed 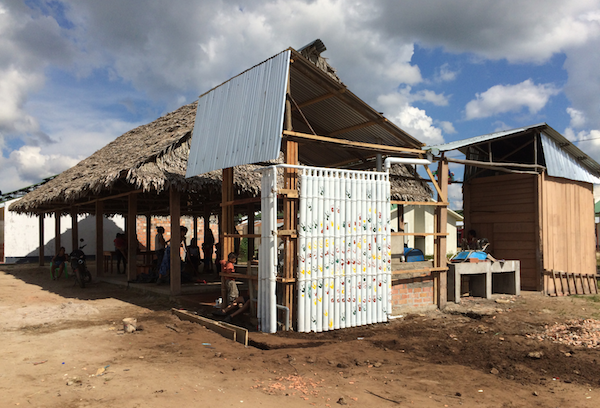 World Architecture Festival (WAF) has revealed the 2018 winner of its inaugural Water Research Prize – a community-led water management system designed by a team of students from Pontificia Catholic University of Peru (PUCP) that captures, stores and treats rainwater and inserts it into pre-existing water networks.

The winner will receive a £10,000 prize to support further research. The prize money comes from GROHE, WAF founder partner and supporter of the prize and an innovative leading supplier of sanitary fittings. The prize money will supplement existing research that seeks to outline ways in which human settlements in the Amazon Rainforest can better adapt to their specific environmental and cultural context.

The PUCP team beat a shortlist of 12 projects drawn from over 60 entries who were assessed by a panel of experts including Judge Henk Ovink, special envoy for International Water Affairs, Kingdom of The Netherlands. Each entrant was asked to identify a new challenge or opportunity related to design and water, and in doing so advance an understanding of water in relation to the built environment.

The design team’s focus was to overcome the challenges around the integration of water and sewage provision in the Peruvian Amazon, where only 31 percent of the population has access to water, despite living in an area with the highest levels of annual rainfall worldwide. Differing from a traditional water tank system, the PUCP team developed a system of tubes that capture, store and treat rainwater, and serves as a non-load-bearing wall that occupies less space and can be more easily integrated with existing architecture. The number of tubes can be increased or decreased according to the user’s water needs. The system also incorporates traditional architectural solutions, such as promoting permeable walls and facilitating cross-ventilation, allowing users to address the high temperatures of the Amazon without the need for artificial systems like air-conditioning.

By designing an independent system from conventional networks, the designers sought to reduce the costs of implementation and maintenance that they generate. The system is also communal and not individual, therefore reducing costs per family. In the same way, its communal use promotes activities, such as washing clothes and cooking, that generate public platforms for inclusion and dialogue.

Paul Finch, program director of World Architecture Festival says, “Ingeniously addressing the ironic condition that communities in the Amazon do not have adequate water despite having the highest rainfall in the world, this proposed communal water management system admirably addresses both the social community and environment challenges interlinked with water shortage and quality. Plus, it is an adaptable idea, there is the ability to replicate the design in similar environmental terrains. It is a worthy winner of our inaugural WAF Research Prize.”

Belen Desmaison, teaching fellow at Pontificia Catholic University of Peru, says, “We are very grateful for this award as it will allow us and the communities in the Amazon Rainforest that work with us to continue to explore alternatives for the provision of water to peri-urban and rural areas. We aim to use this opportunity to work on the production of a rainwater storage system made using local materials and knowledge that can be easily integrated with traditional architectural typologies.”

The prize was the first to be announced following the 2017 launch of the WAFX Manifesto, which identified the key challenges architects will need to address over the next ten years, including climate, energy and carbon; ageing and health; re-use; smart city technology; building technology; cultural identity; ethics and values; power and justice; and virtual worlds.

Michael Seum, vice president Design at GROHE says, “When first identifying projects with water scarcity issues I did not imagine that the Peruvian Amazon would feature on the shortlist. However, this carefully considered project highlights that less than a third of the population has access to water and the proposal of a communal water management system integrating pre-existing water networks sounds like a pragmatic and innovative solution. We are proud to present the £10,000 prize money to this research project.”

For more details on the WAF Awards and the festival visit www.worldarchitecturefestival.com.