Australian cities are lagging behind in greening up their buildings 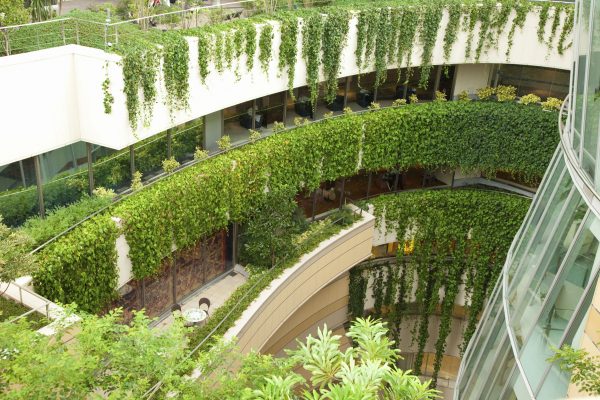 Covering roofs and walls of buildings with vegetation is a good way of reducing greenhouse gas emissions. And these green roofs and walls make cities look nicer. Toronto’s central business district adopted a policy of establishing green roofs on around half of all city buildings in 2009. Research shows this could reduce maximum city temperatures by up to five degrees Celsius.

We spent the past 12 months analysing the case for more greenery on Australian city buildings, drawing on international comparisons. We’ve shown that a mandatory policy, coupled with incentives to encourage new and retrofitted green roofs and walls, will provide environmental, social and business benefits.

These include improved air quality, energy conservation and reductions in stormwater run-off from buildings, which would decrease flash flooding. Green roofs and walls also become new habitats for biodiversity and can be pleasant spaces for social interaction in dense urban areas.

We found numerous studies confirming that greenery on inner-city buildings reduces the urban heat island effect, which is when city centres are hotter than surrounding suburban and outer-urban areas.

What other countries are doing

We examined international case studies of cities embracing green roofs and walls to review policy frameworks which could be suitable for Australia. A range of measures and policies exist and vary depending on building types (buildings need specific features to host vegetation) and the degree to which policies can be enforced.

Singapore is leading in this area. It markets itself as a ‘garden city’ to attract investment, visitors and commerce. Green roofs and walls are a vital and visual manifestation of this policy.

Greenery is ingrained in Singapore’s development sector and is boosted by incentives, grants, awards, certification schemes and government-led development. Through this voluntary-heavy (yet supported) effort, Singapore increased its number of green roofs and spaces ninefold between 2006 and 2016.

Rotterdam’s efforts weren’t as extensive as Singapore’s, but the city more than doubled its green roof area from 2012 to 2017 through incentives, grants, tax benefits and demonstration projects.

London increased its total green-roof area more than fourfold from 2005 to 2016. This was partially achieved through a biodiversity action plan.

And Toronto has the second-largest area of green roofs of the four cities we studied. This has been delivered through a mandatory policy, introduced in 2009, that requires all new developments with roofs of 2000 square metres or more to install green roofs.

Rotterdam’s efforts weren’t as extensive as Singapore’s, but the city more than doubled its green roof area from 2012 to 2017 through incentives, grants, tax benefits and demonstration projects.

The case in Australia

We modelled what could be delivered in the City of Sydney and the City of Melbourne based on the measures taken in Singapore (which is voluntary-heavy), London (voluntary-light), Rotterdam (voluntary-medium) and Toronto (mandatory).

We combined this with data on actual green building projects in 2017 in Sydney and Melbourne to show the potential increase of projects in each city based on the four policies.

In the Sydney local government area, 123 green roof and wall projects were under way in 2016. The below table uses this base to estimate what the numbers of such projects would be for three time periods, based on the policies in the four scenarios modelled.

In the Melbourne local government area, 28 green roof and wall projects were under way in 2016. The table below shows how these could increase based on policies of the four case studies modelled.

How Australia can get on board

Sydney and Melbourne have green roof and green wall policies aligned with their 2030 and 2040 sustainability targets, launched in 2012 and 2015 respectively. Sydney has the Green Roofs and Walls Policy Implementation Plan, while Melbourne has the Growing Green Guide 2014.

There are, of course, barriers to greening up buildings. These include costs as well as lack of experience in the industry, especially in terms of construction and management. Professional capacity for green roofs is still in a developing phase and further training and skill development are needed.

Around 87 percent of the building stock Australia will have in 2050 is already here, and a large proportion of existing buildings could be retrofitted. We recommend a voluntary approach using a mix of initiatives for building owners, such as tax benefits and credits in green building tools.

Focusing on new buildings is likely to lead to more modest growth rates in the short to medium term, relative to alternative approaches such as retrofitting. The annual growth rate of new stock is around one to three percent, which means that policies focusing on new stock will have a substantial impact over the long term.

However, in the short to medium term, a retrofit policy would have greater impact given the numbers of existing buildings suitable for this.

Local government areas can also promote the evidence showing the lift in property values in areas with more green infrastructure – in some instances up to 15 percent. This should encourage voluntary uptake.